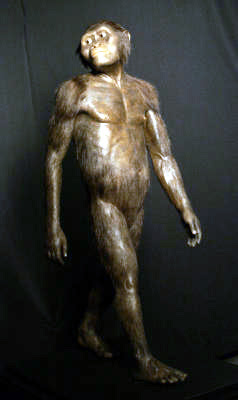 I've always been a big fan of the Houston Museum of Natural Science, and that will only increase over the next eight months. The museum regularly hosts traveling exhibits (The Lord of the Rings Motion Picture Trilogy: The Exhibit being particularly notable), but opening Aug. 31 is one that will surely be one for the history books--Lucy's Legacy: The Hidden Treasures of Ethiopia. Lucy, for those of you late to the party, is a 3.2 million year old fossilized Australopithecus afarensis, one of the very earliest proto-human species. At the time of her discovery in 1974, she was the oldest hominid fossil ever found. There have been older ones found since, but she remains inarguably the most famous human ancestor in the world.

"I am a bit surprised about the ever-expanding popularity of Lucy, especially in light of so many other notable hominid fossil discoveries in Africa," said [Don] Johanson, director of the Institute of Human Origins at Arizona State University.

"Yet Lucy continues to prevail, and she has become an icon for human evolution and is the touchstone by which all other finds are judged. I suppose one of the distinctive things about Lucy is that she has a name, one that is easy to remember, certainly easier than Australopithecus afarensis."

She is pretty much the rock star of the paleoanthropology set. So you can see why its such a big deal that for the first time ever she's going on tour, leaving her home country of Ethiopia for Houston, the first leg of a planned six-year trek.

And therein lies the rub. The tour has provoked a firestorm of criticism from the scientific community, and some fairly big names have entered the fray.

Famed fossil hunter Richard Leakey offered, perhaps, the sharpest criticism of the Houston museum two weeks ago in an interview with the Associated Press from his office in Nairobi, Kenya.

"It's a form of prostitution. It's gross exploitation of the ancestors of humanity, and it should not be permitted," Leakey said of Lucy's travel to the United States. 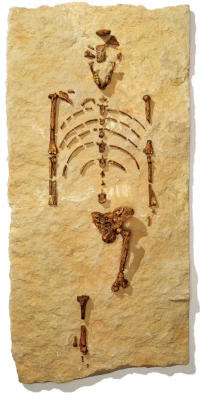 Others insist that the fossil will be irrevocably damaged, that it is too fragile to move or display. Dirk Van Tuerenhout, curator of anthropology in Houston, argues that the museum successfully hosted a traveling exhibit of the Dead Sea Scrolls without incurring any damage, and Lucy--being, well, you know, fossilized--is quite a bit more sturdy than 2,000-year-old papyrus. But that hasn't mollified the critics, who have offered their own "solution" to the controversy.

Several paleontologists have suggested that a replica should be used in her place. At her home museum in the Ethiopian capital of Addis Ababa, in fact, cast replicas of Lucy's bones are on display, while the real fossils usually remain locked in a vault.

And this, my friends, is why we end up with creationists running state boards of education and half of all Americans believing that on the eighth day God created Baywatch or somesuch nonsense. Is it possible for these learned scientists to be just a little more condescending? Could they pool their efforts and be just a smidgen more willfully ignorant? Could they cut their throats any more effectively if we handed them a straight-edged razor?

There is a wanton arrogance alive and kicking within the general scientific community. An arrogance that clings stubbornly to fact while at the same time stridently denying reality. And it pisses me the hell off. The facts in this case are clear: Lucy is one of the oldest hominid fossils ever discovered, and is very valuable for researchers. The reality of the situation is equally clear-cut, if a bit harder for the critics to swallow: Nobody gives a shit about replicas. Does it look the same? Sure. Can 99.9 percent of the population not tell the difference? You betcha. Does that matter? Not one iota. You see, for all the cranial capacity human beings have developed since little Lucy made do with a glob of gray matter the size of a key lime, we are not rational thinkers. Homo sapiens are, first and foremost, irrational and emotional. Just listen to any argument between a science-minded person and a proponent of Intelligent Design. The IDer is not swayed by fact or reason for one simple reason: They don't want to be evolved from anything. The key word there is "want." That's an argument based from desire, and it has nothing to do with cold, rational facts.

It just so happens that a fine movie comes out on Sept. 10 that addresses this strange phenomenon head-on: Flock of Dodos. In a perfect world, yes, humans would all be variations of Mr. Spock, believing only that which is logical and rational. Sure, I can buy that. But this isn't a perfect world. Far from it--there are still people out there forwarding stupid chain letters because they think Bill Gates is going to pay them $5 for each one, and that TONIGHT MARS WILL APPEAR AS BIG AS THE MOON!!!!. Let's just face it, people are fucking stupid, and the only people stupider are the brainiacs who continue to live in ivory towers expecting unadorned reason to win out without any additional effort. Ain't gonna happen.

Lucy on tour is exactly what we need in this country, UNESCO agreements be damned. Lucy needs to head for deepest, darkest Mississippi after leaving Houston, the maybe Utah, Idaho and Wyoming, with a detour through Waco and Crawford along the way. Science needs to engage a hell of a lot more aggressively (and competently, for that matter) than its doing now. If the Discovery Institute can teach their Bible-thumping pharisees how to be eloquent and glib, then there's no excuse for anyone in this country with a science degree not to be capable of the same. If I had my way, every science undergrad would be required to take a minimum of 12 hours in public speaking and public relations courses. Get some late-night infomercials on cosmology and evolutionary biology on the boob tube. We could pair up P.Z. Myers and Phil Plait with Christie Brinkley and Chuck Norris. Damn, that would really kick ass.

Maybe we could even apply this approach to NASA. I'm tired of space flight made dull. 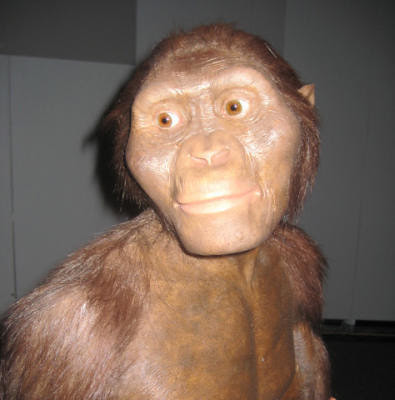 Posted by Jayme Lynn Blaschke at 1:23 AM

Last time I was in the AMNH (as a visitor, not an exhibit), there was a family of creationists close behind me, the mother pointing out to the awestruck kids that the items on display were only replicas and should not be believed.

A few days later, I visited the Smithsonian, and pointed this out to the palaeontologist who gave me a backstage tour. He said it was a problem, but on the other hand, displaying real fossils damaged them, so unless good fossils of a particular creature were plentiful, it was a tough decision.

While I was in the US that time, my local museum displayed the only complete Diprotodon skeleton that had been found up to that date... and someone stole one of its toes.

I have no beef with replicas in general. There's a T. Rex skull casting at the Witte Museum in San Antonio that is very impressive, but the triceratops skeleton on display is the real deal and packs an emotional wallop.

Of course, serious efforts at safeguarding the fossils from thievery should go without saying. There are far too many morons out there willing to steal dinosaur toes for the novelty of it, only to throw away the "old rock" once the newness wears off. But somehow I doubt anyone in Houston will have the opportunity to swipe any of Lucy's digits. ;-)