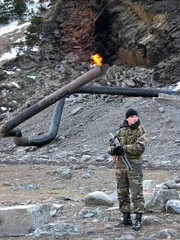 Speaking of Pootie-Poot, as W likes to call him, consider this.

Last month, the Duma passed legislation authorizing Gazprom and Transneft to maintain their own private armies, complete with combat-ready gunmetal.

KGB vet Putin, who is a 6th dan black belt in judo best known for his sweeping hip throw when he's not sending in the Spetsnaz, is scheduled to retire from office in March 2008.

Wouldn't that be the ultimate Gibsonian anti-Halliburton scenario? Putin takes a putatively private sector gig running one of these oil & gas outfits, with their free cash and private armies at his disposal. They go offshore, buying up exploration, production and transport rights all over the southern hemisphere, establishing strategic installations of "security forces," competing head-to-head with the Chinese and the Americans in the century's apocalyptic last gasp scramble to control the denouement of the world's addiction to the black crack and its ethereal cousin. Maybe Cheney could go back to his old gig, buy himself a next gen mechanical heart: cyborg master of Blackwater, counterpoint to Pootie's Dolph Lundgren Siberian Godfather thing. An inevitable lineup, perhaps, for a world without states and a demand for natural resources that exceeds the finite and diminishing supply.

I'd pre-order the action figures for that game today.
Posted by Christopher Brown at 8:02 AM

It seems Putin annexed Gazprom in order to militarize it. Comparisons to, say, the East India Company's private armies are not comforting. Siberian Petro-Sepoys anyone?

What with the Russo-Chinese joint military manouevres (anti-terrorism exercises) and the pres actually making a point of comparing the dabcle in Iraq to Vietnam, I'm starting to get more creeped out than usual.

Yes, and don't forget to throw in the b-team, like Hugo Chavez and Pda.Vsa...I'm wating for the Blackwater IPO.