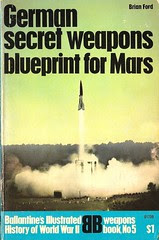 So earlier this summer, in a groovy little used book shop in the mountains of North Carolina, I picked up this vintage bit of English rocket envy. Part of the Ballantine Books WWII series, a kind of proto-Osprey from the 70s, with its high contrast black and white photos that make the time of their subjects more distant than they actually were.

Now I flip through it, and come across this scene of collegiality at that little office park they had up in Peenemünde.

What about it catches my eye? The dude with the pipe and the guy to his right. Not so much because pipe-man looks like the Sith counterpart to Mark Trail or Bob Dobbs of the Church of the Subgenius (though he does), but because my media-addled brain is certain these two dudes are dead ringers for Ralf und Florian, the principals of Kraftwerk. 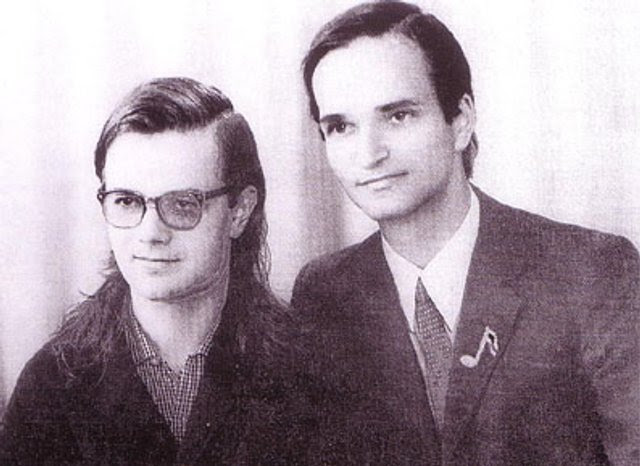 Why does the mind associate hazy photos of V-2 scientists with the mysterious musicians behind albums like Radio-Activity? Perhaps because, as George Steiner most eloquently provoked In Bluebeard's Castle, we have not yet answered the question: How could the culture that produced Kant, Hölderlin, Beethoven, Nietzsche, Rilke have gone mad? Is it possible that “high culture, abstract speculation, the obsessive practice and study of the arts, could infect human consciousness with a virus of ennui, of febrile tedium, from which, in turn, would grow a fascination with savagery… I asked myself whether my entire schooling and the intellectual and formal values which it embodied had not made the cry in the poem, the desolation in the sonata, come to seem more real, more immediate to my imaginings than the cry in the street.”

Put more simply, chances are that a new American or English documentary about the activities at Peenemünde in the 1940s would involve snippets of Wagner and/or Kraftwerk. Because, apparently, they go together.
Posted by Christopher Brown at 7:48 AM