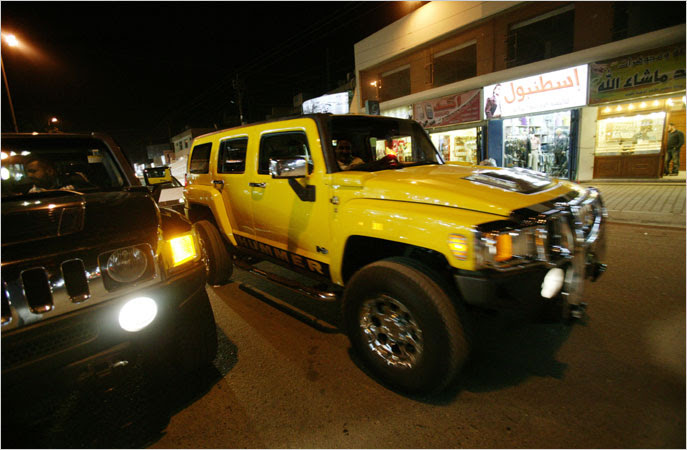 Today's NYT has a mind-blowing story about the sudden popularity of Hummers among certain Iraqi civilians, as a symbol of power and status. The idea of Baghdadi dudes trading in their Brazilis for Dallas-style canary yellow and fire engine red Hummers is, erm, ironic. Of course, the dream will only truly be complete when they have a nearby Hooter's franchise to drive it to.

From my story "Welcome Back Qatar" (RevolutionSF, May 2006):

My cue came as I looked out the window at the smoking ruins of Riyadh's southeastern quarter.

"What this town really needs," said the Vice President, "is a Hooters."

Prince Salman scratched his scalp through his kuffiyeh headgear. The Minister of Culture's briefing papers neglected to mention the Veep's tenure on the Board of a global restaurant franchise during the interregnum.

"Maybe even a couple of them," added the Vice President.

"Family-style restaurant," interrupted the Vice President. "Sports TV, chicken wings, cute waitresses. Hard to explain if you haven't seen one. They have one in Cater."

"Qatar," corrected a pinstriped aide. "Like the TV show."

"Whatever. Didn't used to be. But they have a very nice new Hooters. Even imported the waitresses. Mostly from the flagship in Boca, I hear."

In the plaza outside, a pair of UN armored personnel carriers worked their way through the rubble, prowling for stray mujahideen. I saw phantoms of its reinvention: Planet Hollywood, Hard Rock Café, Warner Brothers Studio Store, mega-Starbucks. Anchors for a sprawling retail complex staffed by a legion of thonged Method dropouts. The Mall-al-Khali.

The Vice President fidgeted in his wool suit, scratching a marbled thigh.

Through the window, my mind projected the scene: A newly conceived pop star, surrounded by a crowd of thousands of young people filling the plaza. As the music cranks up, she dances to the front of the stage and rips off her fundamentalist vestments, revealing a hot brown Britney. Selling Pepsi, making peace.

The Prince leaned back, unimpressed by talk of battered poultry and other white meat...
Posted by Christopher Brown at 4:07 PM