"We are apes with weapons of mass destruction"

That's the outstanding Mark Dery soundbite chosen by the Mexico City newspaper El Universal to capture the public discussion Mark and I had yesterday to open this week's symposium "Parallel Worlds: Perspectives and Prospectives of Science Fiction," as part of the Festival de Mexico en el Centro Historico. Organized by the Mexican author Mauricio Montiel Figueiras and festival director Jose Wolffer, the symposium brings together five English-language sf authors (Christopher Priest, M. John Harrison, Bruce Sterling, Linda Nagata, and me) and Mark, the bard of extreme 21st century culture and undisputed master of Ballardian cultural criticism, to discuss science fiction and society in the new millennium. Mexico City, where the 21st century visibly collides with ancient tendrils of the colonial European and indigenous past on every block, is an ideal venue for such a program, a city in love with ideas at the cutting edge, and an atmospheric feast for thinking about the polyglot human future. The broader festival is filled with other arts and letters pushing the envelope of the new, as with the free jazz geniuses Zu and Han Bennink.

The program continues through tomorrow, with noontime panels moderated by leading Mexican sf figures and evening presentations by the participants. Yesterday's discussion was moderated by Bernardo Fernandez (BEF), and Mark was really on his game with provocative insights to share on the subject, as documented by El Universal:

21st century human beings are "apes with weapons of mass destruction, which is the worst combination possible," said the American critic and essayist Mark Dery, during his participation in the symposium "Parallel Worlds: Perspectives and Prospectives of Science Fiction," organized as part of the Festival de Mexico in the Historic Downtown.

The specialist in alternative culture, digital media and cyberculture, indicated that he doesn't believe in human nature, because "there's nothing less natural than the human," and pronounced that in these times human beings "are not very far from the apes flinging bones in 2001."

The author of Escape Velocity: Cyberculture at the End of the Century, said that science fiction writers have much to learn from the psychoanalytic theories of Sigmund Freud, because human beings "are apes and cyborgs, robots and automatons at the same time; we are more animals than we realize."

Several other papers covered the talk, including Excelsior, which opened with the oddest flattering lead I have ever read: "Mark Dery looks like one of the marionettes from the television series 'Thunderbirds,' set in the year 2026, when the world is dominated by huge projects of engineering and innovative technology." 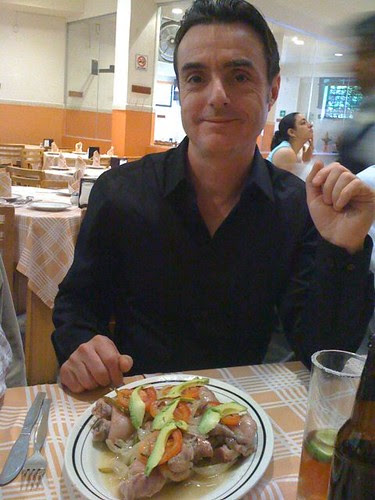 [Pic: Mark Dery enjoying "Las Manitas" in the style of Nuevo Leon — not actual "little hands," which is what I was hoping for, but pig's feet.]

In the evening, Linda Nagata and Christopher Priest gave talks about their own experiences and perspectives of science fiction, culminating in a powerful manifesto by Priest, which I endorse:

"When ideas are suppressed, the tyrants move in to manipulate ordinary people. When expression is made less free, then ideas start to suffer. I hold as axiomatic the belief the fiction should express ideas, should defy tyrants and governments, that it should speak directly to the reader, and provide entertainment and provocation in equal measure. This is the cause for which I stand."
Posted by Christopher Brown at 8:42 AM

Donna Haraway, "A Cyborg Manifesto: Science, Technology, and Socialist-Feminism in the Late Twentieth Century," in Simians, Cyborgs and Women: The Reinvention of Nature (New York; Routledge, 1991)

Which is just to say all those quotes made me think of the Donna Haraway, and I didn't think one woman (Linda Nagata) in the conversation was enough.

Agreed , Jessica. I know the organizers agree with your comment regarding having more women in the conversation and tried very hard to get other female sf writers and critics to participate, but had trouble doing so. Not an exculpation, but an expression of concurrent frustration.

Is nice to have you here in Mx and Dery too, thanks so much for your points of view about videogames and Sci-Fi writers, this two forces could join some day to give us a better quality of a wide perspective of this great world. Halo did it yet, Half-Life and Bioshock too.

I think the "VAST" book by Linda Nagata could be a great RPG videogame but i guess she would not be agree with me again!!!

If you have one too hope to see ya there!