New Horizons is winging its way toward Pluto, but along the way it's recording some really nifty scientific observations. The image of Jupiter's moon, Io, below is one of the most impressive ones thus far. 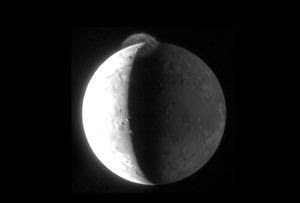 Ponder, just for a moment, the enormity of that volcanic plume. Keep in mind that Io is roughly the size of our moon. The mind boggles. And the sub-compact space craft New Horizons, not even designed to explore the Jovian system, continues to give us valuable science from that corner of the solar system. I can hardly wait for it to actually reach the Pluto-Charon system. No telling what wonders will be revealed.

These new views include the closest look yet at the Earth-sized
"Little Red Spot" storm churning materials through Jupiter's cloud
tops; detailed images of small satellites herding dust and boulders
through Jupiter's faint rings; and of volcanic eruptions and circular
grooves on the planet's largest moons.

New Horizons came to within 1.4 million miles of Jupiter on Feb. 28,
using the planet's gravity to trim three years from its travel time
to Pluto. For several weeks before and after this closest approach,
the piano-sized robotic probe trained its seven cameras and sensors
on Jupiter and its four largest moons, storing data from nearly 700
observations on its digital recorders and gradually sending that
information back to Earth. About 70 percent of the expected 34
gigabits of data has come back so far, radioed to NASA's largest
antennas over more than 600 million miles. This activity confirmed
the successful testing of the instruments and operating software the
spacecraft will use at Pluto.

"Aside from setting up our 2015 arrival at Pluto, the Jupiter flyby
was a stress test of our spacecraft and team, and both passed with
very high marks," said Science Mission Directorate Associate
Administrator and New Horizons Principal Investigator Alan Stern,
NASA Headquarters, Washington. "We'll be analyzing this data for
months to come; we have collected spectacular scientific products as
well as evocative images."

Images include the first close-up scans of the Little Red Spot,
Jupiter's second-largest storm, which formed when three smaller
storms merged during the past decade. The storm, about half the size
of Jupiter's larger Great Red Spot and about 70 percent of Earth's
diameter, began turning red about a year before New Horizons flew
past it. Scientists will search for clues about how these systems
form and why they change colors in their close observations of
materials spinning within and around the nascent storm.

"This is our best look ever of a storm like this in its infancy," said
Hal Weaver, New Horizons project scientist from the Johns Hopkins
University Applied Physics Laboratory (APL), Laurel, Md. APL built
and operates the New Horizons spacecraft. "Combined with data from
telescopes on and around Earth taken at the same time New Horizons
sped past Jupiter, we're getting an incredible look at the dynamics
of weather on giant planets."

Under a range of lighting and viewing angles, New Horizons also
grabbed the clearest images ever of the tenuous Jovian ring system.
In them, scientists spotted a series of unexpected arcs and clumps of
dust, indicative of a recent impact into the ring by a small object.
Movies made from New Horizons images also provide an unprecedented
look at ring dynamics, with the tiny inner moons Metis and Adrastea
appearing to shepherd the materials around the rings.

Of Jupiter's four largest moons, the team focused much attention on
volcanic Io, the most geologically active body in the solar system.
New Horizons' cameras captured pockets of bright, glowing lava
scattered across the surface; dozens of small, glowing spots of gas;
and several fortuitous views of a sunlit umbrella-shaped dust plume
rising 200 miles into space from the volcano Tvashtar, the best
images yet of a giant eruption from the tortured volcanic moon.

The timing and location of the spacecraft's trajectory also allowed it
to spy many of the mysterious, circular troughs carved onto the icy
moon Europa. Data on the size, depth and distribution of these
troughs, discovered by the Jupiter-orbiting Galileo mission, will
help scientists determine the thickness of the ice shell that covers
Europa's global ocean.

The number of observations at Jupiter was twice that of those planned
at Pluto. New Horizons made most of these observations during the
spacecraft's closest approach to the planet, which was guided by more
than 40,000 separate commands in the onboard computer.

"We can run simulations and take test images of stars, and learn that
things would probably work fine at Pluto," said John Spencer, deputy
lead of the New Horizons Jupiter Encounter Science Team, Southwest
Research Institute, Boulder, Colo. "But having a planet to look at
and lots of data to dig into tells us that the spacecraft and team
can do all these amazing things. We might not have explored the full
capabilities of the spacecraft if we didn't have this real planetary
flyby to push the system and get our imaginations going."

More data are to come, as New Horizons completes its unprecedented
flight down Jupiter's long magnetotail, where it will analyze the
intensities of sun-charged particles that flow hundreds of millions
of miles beyond the giant planet.