My wife and I have recently spoken about replacing the minivan she currently drives. It's a '98 model that is getting up there in mileage, which means more and more little niggling things are in need of repair more often than not. The plan is, more or less, to use next year's tax return to fund a significant portion of said venture. This is a fairly common domestic discussion--thousands of couples across the U.S. are having this exact same conversation, with the same strategic planning, probably as I type this.

Of course, much to my wife's chagrin, I can't simply stop there and be done with it. My brain doesn't work that way (when it works at all, that is). I currently drive an '02 PT Cruiser, and if the wife's wheels are up for replacement in '08, that means mine will be due for a refresher in '10 or so, since I put a lot more mileage on due to commuting. Only here's the deal: Unless the proposed Cerberus buyout of Chrysler changes things, Chrysler plans to kill off the PT Cruiser before then, replacing it with a "crossover" vehicle with little or no retro styling.

Chrysler Group crossovers coded JC49 (Dodge) and JZ49 (Chrysler) are set to be produced starting in December 2007, with large-scale exports to Europe starting in 2010. The JZ49 might be named PT Cruiser but would not be recognizable to current owners; Chrysler reps have repeatedly said that they cannot evolve the PT’s styling and have no interest in doing so. The Toluca plant is set for a $1 billion upgrade to allow production of the new crossover; it built 177,370 PT Cruisers in 2005, not bad for a “fad car” in its fifth year (2007 will be the seventh year, including 2001).

That Chrysler is looking to kill off the PT is mind-boggling. The model has averaged 120,000 units sold since its inception, making it Chrysler's best-selling small model. That 177,000 spike in 2005 is not insignificant for an American automaker in a market dominated by the Toyota Camry, which sold 432,000 cars in 2006. More importantly for Chrysler, though, is the fact that people who buy the PT Cruiser are people who don't normally drive Chrysler vehicles. Also, for some arcane reason, the Cruiser is classified as a light truck for EPA mileage calculations, which benefits the overall numbers of Chrysler's truck line (on paper, at any rate. My '02 5-speed manual gets 21 mpg in city driving and 29 on the highway. Later year models have improved gas mileage for the automatic transmission vehicles, plus emissions have been improved dramatically across the board). The argument that a retro style can't be redesigned is perhaps the most misguided statement ever--it tells me that the decision has long since been made to stop production, and everything else is just details.

To understand why the PT Cruiser is treated thusly, we need to examine the model's history. Originally intended to be the second vehicle in a revitalized Plymouth line, the Cruiser first saw life as the Plymouth Pronto concept car, sort of a kid brother to the high-end Plymouth Prowler.

After the Daimler-Chrysler merger, the Plymouth line was killed off entirely, with the Prowler and Pronto being the only survivors. The Pronto was redesigned again, and the concept Pronto Cruizer was unveiled in 1999. 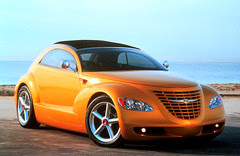 In 2001, the PT Cruiser went into production, was a huge hit, and garnered Car of the Year honors so one would think that Chrysler would nurture the model. One would be wrong. Remember, this car was inherited from Plymouth, and never fit in with the design choices the company was pursuing with the 300 sedan series and newer vehicles. Remember, too, that Chrysler and Dodge had committed more and more production toward profitable trucks and SUVs, relegating passenger cars to secondary status. And finally, Brian Nesbitt, the designer who led the team that produced the PT Cruiser left Chrysler for GM, where he spearheaded the development of the Chevy HHR, which went on sale in 2005. The PT Cruiser is an orphan vehicle in pretty much every sense of the word. Had Plymouth survived the Daimler merger, does anyone doubt that the Voyager minivan would've eventually been revamped using PT Cruiser styling? Does anyone wonder why Chrysler didn't pursue this approach using a Caravan chassis? The variations on the PT Cruiser platform have been extremely limited under Chrysler's stewardship: There's a turbo version, a convertable (introduced in 2005), several "Edition" variants and a slightly redesigned version introduced in 2006. That's it. To maximize factory production capacity, Chrysler should have long ago adopted a strategy of introducing variants on the Cruiser platform on a yearly basis. Even if these didn't have large sales volumes, development costs would've been extremely low from using existing Cruiser designs and parts, while keeping the Toluca plant operating at full capacity. It's not like thought wasn't given to this approach--look at some of the concept variants Chrysler's designers came up with: 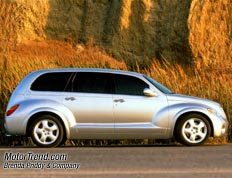 First, we have a pair of obvious takes on the platform. The first is the wagon variant, which isn't quite a minivan, but is moving that direction. The PT Cruiser is more roomy and versatile than you'd first expect, sure, but space is still limited. Stretching it out a bit would make it more attractive for families. As for the panel truck design, the mind boggles why Chrysler never pulled the trigger on it. It'd give them a vehicle with which to compete in the European market, where small delivery vans are used in jobs where small trucks are preferred in the U.S. And with gas prices so high, a segment of the U.S. market would likely embrace the car as well. Even GM has seen the logic of this, producing a panel truck version of the HHR barely a year after the first HHRs rolled off the assembly lines. 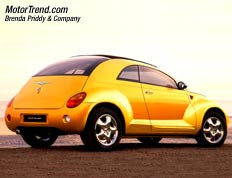 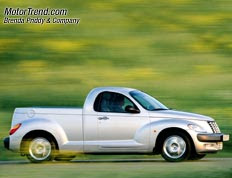 A full wagon and panel truck version are the low-hanging fruit, though. Simple niche vehicles that don't stretch the imagination. Were Chrysler to get aggressive in their design efforts--in short, more like the turning-around GM--they'd make a splash by producing limited numbers of the two models above to draw folks to the showroom. And sell a few vehicles, too, since the price point would be affordable to more people than comparable cars. Firstly, the PT Coupe. In the 30s and 40s, everyone from Chevy to Ford to Studebaker and Nash automatically produced coupe versions of their mainstay sedans. A sportier version to appeal to car enthusiasts that didn't need the conservative four-door sedan, simply repackage the existing turbo version of the Cruiser and you've got something that the MoPar hot rodders would got nuts for, as well as folks who like the concept of the Dodge Charger muscle car renaissance, but want something a little more sleek and stylish. Capture the entry-level muscle car market (yeah, I know that's funny). The PT Pickup, on the other hand, is quite a bit more daring. I mean, it's a miniature pickup with car underpinnings and styling that hardly screams "Heavy duty work load." The upscale Chevy SSR flopped because it was over-priced and under-powered as a performance vehicle, but a PT Pickup wouldn't be competing for that same niche. Instead, it would tap into that segment once attracted to the old El Camino. In its three years of production, the SSR sold only 24,000 vehicles at a list price of $41,000. If a PT Pickup sold 24,000 a year at less than half the sticker price, it'd be a roaring success (again, keeping the factory operating at full capacity). 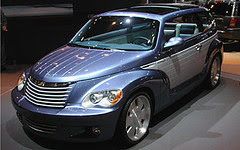 The Cali Cruiser, above, is what finally convinced me Chrysler had it in for the PT, no matter what. All the disclaimers about not being able to redesign a retro vehicle went out the window with this sweet piece of work. The look remains distinctively that of the PT Cruiser, but it's sharpened up and more muscular, bringing the design closer to that of Chrysler's other auto lines. I particularly like the sun roof/skylight and revamped back hatch which features a window that can be rolled down (a major gripe I have with the current design). The two door approach is nifty as well, and would allow showrooms to stock both two-door and four-door models, which appeal to different crowds. Overall, I really, really like this take on the vehicle, and hope that if Cerberus has any sense, they'll point to the Cali Cruiser and say "That's the second-generation PT. Make it happen."

Unfortunately, I'm not holding my breath for any great change of course from Chrysler until I see it. Which left me with two apparent options: Buy a late-model used PT Cruiser in 2010 or so and do my best to maintain it, or head to a Chevy dealership and settle for a HHR. While I think the HHR is a nifty vehicle, the thought of driving one didn't thrill me. I puzzled over it for a long time--the PT Cruiser and HHR both have retro styling from the 40s, and they're both essentially the same vehicle in concept (if not brand) so why didn't the HHR appeal to me? Then it struck me--the Cruiser is more flowing and streamlined, whereas the HHR is more angular and squared off. Thinking on it further, I realized that of all the old cars produced in the 30s and 40s, the ones I liked the best tended to have smooth curves and a flow to their design, whereas the ones that boasted a more "blunt" look turned me off. Which in turn got me thinking some more...

Is that you and your wife in the picture of the Cali with the surfboards?