Last week I discussed the dangerous line of thinking that brought me to this point: Chrysler is seriously considering discontinuing the PT Cruiser model. If what I like most about the PT Cruiser is its retro styling, when it comes time to replace my blue Cruiser (below) why settle for a modern retro-styled vehicle that I'm not crazy about (aka the HHR) when I could buy an original vehicle from the halcyon days automotive yesteryear? 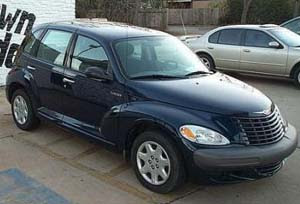 I can do this. I am a grown-up, and as a grown-up I don't have to listen to that little voice that says "You can't do that. It's not responsible." That comes from listening to my parents too much over the years, methinks. I also have a secret weapon in this acute, mad obsession: My brother Chris, who is a Master Mechanic and all-around automotive genius. He inherited our grandfather's 1955 Bel Air, which I remember riding to Dairy Queen for milkshakes back in the early '70s. Grandpa Fritz bought it new in 1955, trading in a 1939 two-door Chevrolet for it (no idea the model). The four-door Bel Air was supposed to be black, but there was a mix-up in the order, and it came painted solid Glacier Blue. Even so, it was a sweet looking car. Sadly, it hasn't been registered since 1979, even though Grandpa cranked it regularly to keep the engine in shape until his death. There is surface rust on it, and the engine needs to be overhauled, but overall it's in great shape. Once Chris has it fully restored, he's promised to help me with my vintage wheels. But what wheels truly appeal to me? Attending a swap meet might offer some hints. 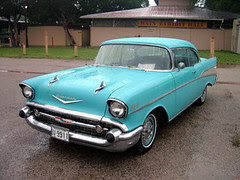 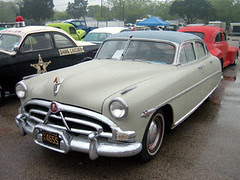 The sky-blue '57 Bel Air caught my attention right away. It's a nice car, no doubt, but while I like a lot of the '50s cars, they don't hold the same resonance as vehicles from the '30s and '40s. That's not to say the Hudson Hornet parked across from the Bel Air didn't stir longings of desire in my heart. I've never been what you'd call a gearhead, but I do appreciate the aesthetics of well-designed cars. And looking at the Hudson, I realized something else: I'm a sucker for the extinct. I have sports pennants hanging in my office, and as many teams as not are defunct and/or have long since changed their names. I like the Hudson in no small part because that carmaker has vanished into the mists of time through buyouts and mergers. 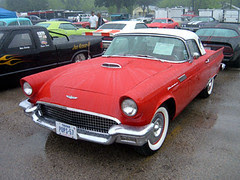 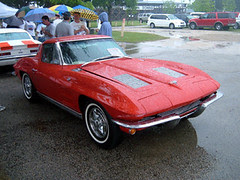 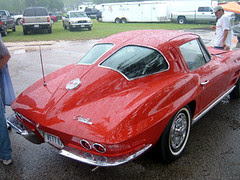 That doesn't mean I turn up my nose at Corvettes. I prefer the early models from the 50s, like the sweet little number above left, but a hot Stingray--especially one with the legendary split back window--slow me down every time. Pretty much any Corvette is out of my price range, unless I want a ragged out recent vintage, so I'll content myself with window-shopping for these. 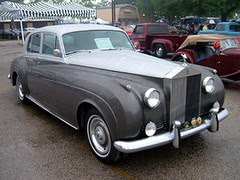 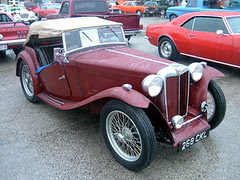 You'd be amazed at how many older Rolls Royces in decent condition make it to the resale market with semi-affordable prices. The one above isn't one of those. Neither is the MG TC pictured above. 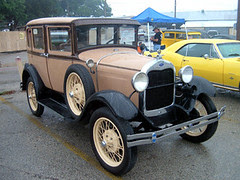 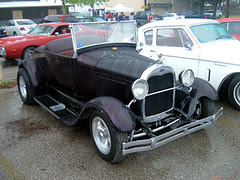 In the other chronal direction, I admired a 1930 Ford fordor sedan. They're a wee bit boxy for my taste, and the spoke wheels are too archaic. With antique cars of this nature, daily driving is pretty much out of the question, as the transmission isn't set up to move the car at highway speeds. And I really question how safe that would be if it was. Parked beside it was another vintage Ford, a 1930 Cabriolet coupe (I think). This one's been significantly modified, and to me that undermines the charm of old cars. It's not a street rod abomination, but it's not something I'd want to be associated with. There were lots of street rods at the show, each one more gaudy and tacky than the next. I didn't waste pixels on those. 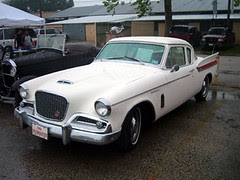 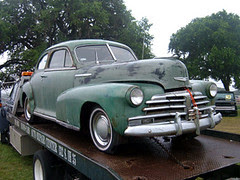 Where extinct cars are concerned, Studebaker has to reign as one of the most famous of the failed automakers. I suppose the 1950-51 bullet-nosed Champion is their most famous model (shamelessly ripped off from the Tucker Torpedo of a couple years before) but the '61 Studebaker Hawk, with its aggressive tail fins and chrome is certainly emblematic of the era, a last gasp at respectability before the South Bend company lost its long-running competition with the Big Three in Detroit. Not my cup of tea, but I still admire that vehicle. After the Stude, I'd pretty much run out of car show vehicles to gawk at. It was wet and dreary, but I thought I might make a loop through the car corral and see if any clunkers remained for sale. Short answer: Not many. Most participants had packed up and left earlier in the day, but I did come across this trailered '47 Chevy Fleet Master. It's closer to what I want--I do admire the styling of the 1936-40 Chevy Master line--but it's not there yet. The owner offered it to me for $2,000, which wasn't too bad a deal, actually. It needed some work, but I'm lucky to have Chris on my side.

The more I thought about it, a fixer-upper made more sense. Enthusiasts spend tremendous amounts of money restoring vintage cars back to factory conditions, but I want one for a daily driver, not a show car. Which means I may have to alter the transmission. And install seat belts. I'm in Texas, so an after-market air conditioner is almost a requirement. If I did that to a mint-condition classic, I'd be lynched. Not to mention the fact that a fully restored car costs considerably more than a junker. If I rehabilitated a derelict vehicle--or one that is merely in so-so condition--my conscience would be clear for me to alter it to my needs. I'm still not going the street rod route, but some compromise suddenly looks possible...

For some droolworthy autos, check out the "Curves of Steel" exhibition being held at the Phoenix Art Museum: