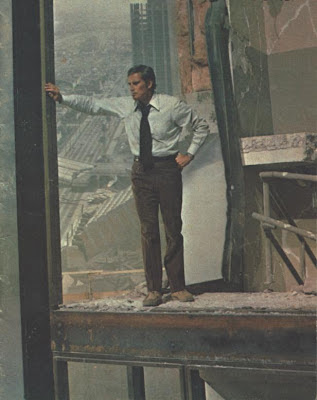 On September 11, 2001, I had lunch with a one of my cyberpunk elders. Trading notes on our real-time observations regarding that morning's unfolding CNN apocalypse and its making real of so many of our collective fictional imaginings, I remarked something along the lines of...

"On a day like this I wish Charlton Heston were my president."

...playing on the NRA bumper sticker slogan and endeavoring to repurpose its metatextual frisson.

The cyberpunk was not buying it. Having a decade on me, and being a committed futurist, he was of a generation and mindset such that the very idea of Charlton Heston reeked of pulp-era anachronism and square-jawed retardation.

Of course he was right. But so was I. Heston, through the aggregated avatar of his iconic characters, represented (for me) my gullible youth's ideal of the can-do American lone action hero who solves our disasters with Randian resolve. A Yanqui-Hegelian everyman übermensch who resurrects lost virtue and dons the cloak of reluctant Paladin when the circumstances of the World Gone Mad finally compel it. The Ronin of bourgeois Anglo-Saxon values stranded in exaggerated versions of our entropic dystopia who keeps fighting the fight of his fathers despite its self-evident futility. The string of back to back post-pulp epics -- Planet of The Apes, The Omega Man, Soylent Green, Airport '75, Earthquake -- in which the last upper middle class white dude puts his fist in the dyke of Götterdämmerung. Watching our bumbling President in those early days, my inner adolescent wished the frat boy fuhrer had some of those action man genes working through his system.

Of course, by the end of that week, W. had done just that, and was barking into the megaphone at Ground Zero, and before long he was in the flight suit that inspired a line of custom action figures. And look what that got us.

A persistent theme of life during GWOT-time has been the failure of reality to live up to the action hero narrative that wrapped our national self-image throughout the post-WWII era. The Schwarzeneggerian political semiotics that worked so well in the Reagan era started blowing gaskets when the new generation of political actors, weaned on war movies rather than actual combat in actual wars, seemed to believe that if you mouthed the lines you could make the movie come real. Actual White House spin doctors declared their ability to create their own reality with all the power of a disaster movie production designer. Easy to believe among those who thought they had defeated the Soviets with cathode rays and post-Churchillian rhetoric. But, as they learned, the power to spoon-feed corporate media only gets you so far. 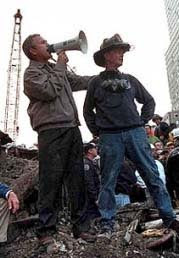 You could hear the cultural gears grinding as the Hurricane Katrina disaster played out, and confused television watchers realized the closest thing to Hestonian figures were the upper middle class Dads from Uptown who loaded their family in the SUV and relocated to a comfortable hotel in Houston. The bounty hunt for the evil villain Osama has degenerated into a "Where's Waldo" self-parody. And when patriotic NFL star turned volunteer Ranger Pat Tillman got fragged by his own troops, the big brass pulled out all the stops to rewrite the public narrative to better fit the Bruckheimer Paradigm. (And of course, the saddest self-parody of all was the aged Heston spouting echoes of his own movie lines at NRA conventions for the cameras of Michael Moore.) Ad man spin doctoring works fine in political campaigns and the manipulation of domestic public opinion, but it's not so good at impacting actual tactile reality. As President Heston didn't say, well-manipulated news narratives don't kill people, guns, bombs and natural disasters do. 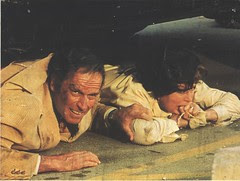 Perhaps it is no coincidence that in the week of Heston's death I have seen my cynical thematic arc come full circle with the flurry of reports about the making of an actual movie about the crew that practices geopolitics as a Beltway variation on the Hollywood pitch session. Oliver Stone's W. is in production, with an ambitious goal of release in time for the elections. President Josh Brolin drinking his non-alcoholic beers in the shadow of Poppy James Cromwell, fresh from a similarly spooky paternal turn as Jack Bauer's geopolitically corrupted dad in the last season of 24. The Welsh Mr. Fantastic as Tony Blair. And Thandie Newton as Condi!

The first few pages of an October 2007 version of the script appeared online just the other day:

CHIEF SPEECH WRITER
"Axis of Hatred?" I don't know. Something about it... just misses. ROVE
(pipes up) Well, then what about "Axis of the unbearably odious?"

Bush, intent. Scowls at him.

BUSH
Don't get cute, Tudrblossom. (nickname for Rove) This is serious.

CHIEF SPEECHWRITER
What about... "Axis of Evil?"

Bush thinks for a moment.

RICE
But Mr. President, how are we going to tie them all together? It's not like they're Germany, Italy and Japan--who were on the same side.

HADLEY
Yeah, they're not aligned with each other.

ROVE
Who gives a shit? It plays.

BUSH
They may not be aligned. But they're threats to our security. Iran and Iraq is trouble next door to trouble. And they have to know that this President is telling them that they've got a problem. With us.

RICE
Still, I think the Iranian people could take offense in being lumped together with the Iraqis and North Koreans. After all, they have a president who was democratically elected.

HADLEY
(nods agreement)
Could send the wrong message to the democracy movement, sir.

BUSH
No, Hads, you don't get it. Khatami along with the students, the reformers, they'll understand. They want Freedom. It'll give legitimacy to their struggle against the hardliners, the deadenders, the Ayatollah Cockamamies. Iran stay in.

Rove opens a bottle of non-alcoholic beer for the President. Cheney finally chimes in.

CHENEY
Anyone can go to Baghdad. Real men go to Tehran.

Yet to be cast: Cheney, Rummy, and Rove. Suggestions?

What would happen if they let the real W. choose the songs for the soundtrack? That would rock.

I recall a passage in Killing Monsters by Gerard Jones. The author spoke to a man who had been a peace activist in the '60s about TV and violence. The man recalled that when he went to a protest and they were surrounded by cops or troops, he nerved himself up by imagining he was Marshal Dillon facing down the baddies.

I don't think it's wrong to yearn for heroes. I guess we just have to know what that yearning can and can't do for us.