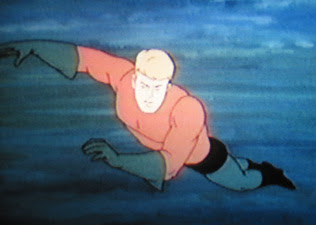 Aquaman is a dorky Super Friend, and Prince Namor is like Heathcliff with gills.

Watching the Olympic swimmers torpedo their way through Beijing's magic aqua cube, I try to summon both prototypes, but can only think of Flipper, the lovable TV dolphin with a heart of gold.

I watch the network's self-parodic profiles of chlorinated Midwestern übermensch Michael Phelps, with the "can you believe that, Bob?" banter about his daily 12,000 calories of pancakes and Ann Arbor strip mall moo goo gai pan, and I wonder if his next gig will be jumping for energy bars dangled by his trainers at the main arena of Sea World. Do you suppose he can leap from the water and do back flips? Swim backwards the length of the pool with a beach ball balanced on his nose?

Every time they break for an interview with him or one of his teammates, I half expect him to be unable to speak in human language, to instead answer all questions with a series of seal barks or ventriloquized whale sign. If only.

Perhaps there is something de-evolutionary about fully aquatic humans, living in their simpler human world of nothing but swimming, eating and sleeping down in the tranquil silence of the deep blue.

I think of Patrick Duffy as the Man From Atlantis of late 70s American television, bizarro occupant of the otherwise undiscovered congruence of Jacques Cousteau documentaries and The Six Million Dollar Man. Interviews with superhuman swimmers should be more like this choice clip:

All variations on homo superior, right? I'm with John Tierney, when he argues in Tuesday's Science Times that we should abandon the self-evidently anachronistic idea of the "natural athlete," as quaint as the idea of gentleman amateurs in an era where the Olympics (at least the big events that make the American networks) are little more than the ultimate two-week product placement opportunity, advertisements on the back of young people segregated from society for the technologically-assisted pursuit of pure athletic perfection.

"Let the Games be Doped"

Let the super-swimmers really indulge their de-evolutionary tendencies, transforming them into dolphin people. Orcas with dorm rooms, maybe with a special event where they get to chase the color commentators through the pool with predatory vat-grown incisors. And blowholes!

The losers could be handled Soylent Green style, served as exotic entrees in Beijing's culinary underground, Anthony Bourdain licking his lips over the well-seasoned shoulder meat.

Maybe it's just me.

Posted by Christopher Brown at 8:32 AM