You’ve seen it. Everybody in the urban United States has, and I have no doubt it’s scattered across the world. It’s the blue COEXIST bumper sticker where the white letters are, respectively: the crescent and star of Islam; the Peace symbol for “o”; a male-female-equality “e”; a Star of David for the “x”; an “i” topped with a Pagan Pentacle; an “s” adapted from the Taoist Yin-Yang symbol; and a “t” that’s a Christian Cross. Though there are many variants, this is the classic. There seems to be some controversy over the copyright of the classic design. Interestingly, the artist is not the party trying to control the copyright, according to a Web site called carryabigsticker.com.

Recently I saw the bumper sticker on a late-model car in the parking lot of a Roman Catholic retreat center. Someone there was evidently on the Coexist wavelength.

Then when exploring my new neighborhood (Old Braeswood in Houston) I found a pleasant little park with a bench surfaced in hand-made tiles. One of the tiles is a bright yellow take on COEXIST. Very sweet. 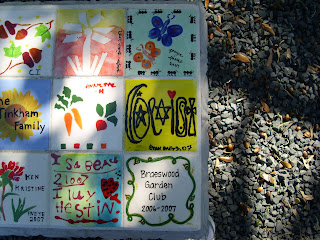