I've always thought libraries in general and the one in which I work in particular have so much interesting stuff - starting with but by no means limited to the books. Here is a case in point. Last Saturday, Rice University received a Moon rock in honor of John F. Kennedy. It was in the Rice University football stadium that JFK committed the USA to the Moon race in 1962. The Kennedy family received the rock from NASA in honor of the 40th anniversary of the Apollo lunar landing. The Kennedys now have donated it to Rice. Through March 2010, the rock is on exhibit in Rice University's Fondren Library. 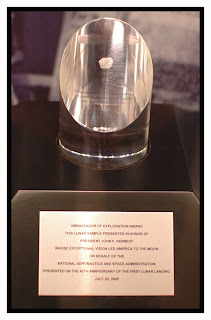 Photo courtesy David Engle. Check out David's images of Rice and Houston on Gigapan: it's a fantastic photographic technology.
Posted by Alexis Glynn Latner at 9:42 AM