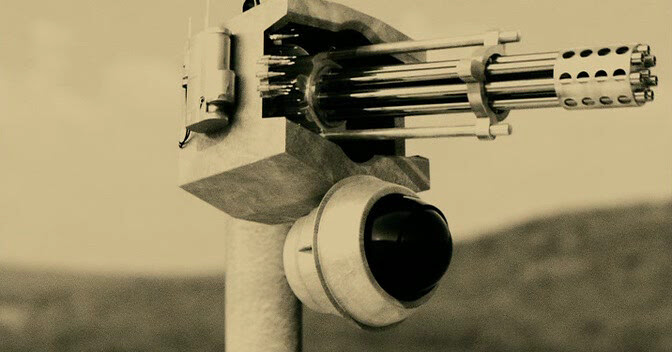 In the 2009 cyberpunk film Sleep Dealer, the U.S.-Mexico border is guarded by a machine comprised of (i) a surveillance camera, (ii) a machine gun and (iii) a robot voice interrogator, the apparent purpose of which is to keep Americans from leaving the country. Today's news reveals what appear to be plans to implement this dystopian vision—except that the real robots will be flying robots, and they won't ask questions.

"Senators Offer a Bipartisan Blueprint for Immigration"alerts The New York Times on the top of the front/landing page, coding the proposal as good news you should reflexively support. "Border Security First, Paving Way to Path to Citizenship," reads the sub-head, above the pictures of leading Democrats and Republicans sharing the podium. Keep reading. Better yet, dig into the talking points.

Short version: The border will be secured by armed flying robots. If you sneak past them, we will let you stay as a guest worker.

Some highlights from the Orwellian Senatorial PDF:

"To fulfill the basic governmental function of securing our borders, we will continue the increased efforts of the Border Patrol by providing them with the latest technology, infrastructure, and personnel needed to prevent, detect, and apprehend every unauthorized entrant.

"Once the enforcement measures have been completed, individuals with probationary legal status will be required to go to the back of the line of prospective immigrants, pass an additional background check, pay taxes, learn English and civics, demonstrate a history of work in the United States, and current employment, among other requirements, in order to earn the opportunity to apply for lawful permanent residency. Those individuals who successfully complete these requirements can eventually earn a green card." 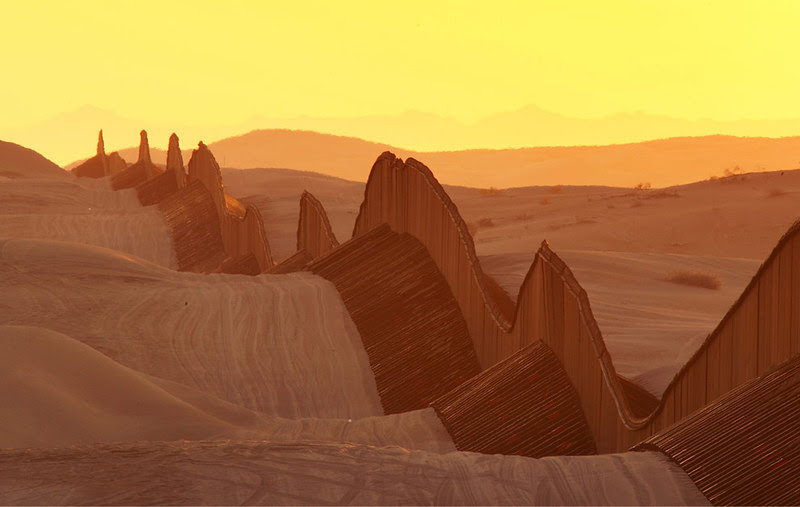 [Pic: Section of the border wall in Arizona that is designed to move with the shifting sands.]

The proposal is indeed a wonderful example of our two-party system in action. Republicans get to perform new oratorical science fictions about the omniscient super force-field robot border wall. Democrats get to imagine a new underclass subservient to citizen (union) labor and so dependent on the state that each member actually has to register on the official ledger.

You saw the part about how the guest workers will have to pay taxes while they are taking the classes where they learn the Pledge of Allegiance and waiting for their background check to be completed, but won't be eligible for any government benefits? I bet the lines are already forming.

Never mind the fact that net migration trends have reversed in recent years. Or that by mid-century, our aging population and declining birth rates will probably have us paying bounties for fresh young labor to come over and man the life support maquiladoras for the Baby Boomers that never die. If you were as nutty as Alex Jones, you might think that's exactly the plan: America as labor camp for the last rich white guys to live like posthuman sultans, looking out the window at the endless green fairways behind the fence, lit up at night by the fracking flareoffs. That's the sound of Chuck Schumer giving John McCain the high five that you just heard. 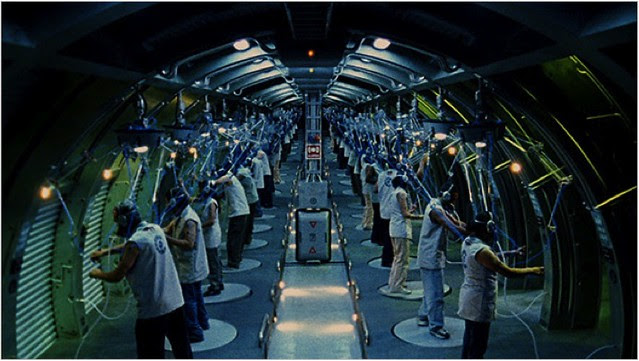 A while back, I was kidnapped by the Tijuana Liberation Front, and they made me read this message for the hostage video, which was played back to the lanes of cars lined up to cross at San Ysidro. I tried to synthesize some of my thoughts on the border as mental and physical space, some of which are, I like to think, useful context for reading today's news:

The next generation of border fortifications will be invisible and essentially imaginary—an American exercise in state-sponsored science fiction very similar to Ronald Reagan’s “Star Wars” space-based defense against Soviet nuclear missiles, which did not have to be real to break the financial back of the Soviets trying to match it. The border wall does not actually need to work to fulfill its purpose.

In her 2010 book Walled States, Waning Sovereignty, UC-Berkeley Professor Wendy Brown makes a compelling case that the real purpose of the global boom in border fortifications is to restore the idea of the sovereign state in a world where the nation-state is diminishing in relevance and coherency. In Brown’s view, the U.S. border wall primarily exists to reinforce in the minds of American citizens the idea that the border—and the Nation—really exists...

The border wall draws the line from the map in “real” space, but as HSARPA’s call for ideas shows, it does very little to make that line “real.” ...To the extent the next generation border security systems will work, it will not be because they actually function as physical barriers. It will be because people believe in them as a representation of the idea of the country they define. Government-designed surveillance and interdiction networks, operated by the inheritors of Dr. Strangelove’s war room, only work in Hollywood reality as an accepted narrative of government power that reinforces the identity of the citizen living in a protective Panopticon.

You can read the whole thing over at the New York Review of Science Fiction.

Better yet, go browse around inside the the curious website of HSARPA—the Homeland Security Advanced Research Projects Agency, and get a vision of a future you might not have imagined.

And don't forget the gate code. 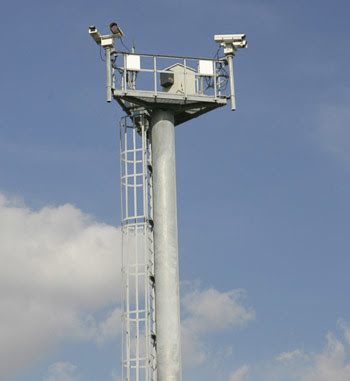 Posted by Christopher Brown at 9:23 AM

Chris - fantastic summary of this strange issue. As I listen to commentary on this new legislation I wondered when and if they would ever actual move past the 'secure border' issue. How will that be measured? When is the border secure enough to move forward with the other stuff? And, as you point out, how many people are really going to go that route? Strange and wonderful days.

Agreed, James—The clear subtext of this issue, to me, is that the border will never be completely secure, and I believe we can expect the political demagoguery and fiscal bonfires to summon magical forcefields will continue pretty much unabated for twenty years, until demographic shifts (especially increased longevity and its creation of a bigger chunk of the population that consumes more labor than it generates) compel us to pay bonuses to any able hand that wants to come over and help keep the engines running. I suppose the Hispanicization of the border states could cause this debate to calm down sooner—Republicans in states like Texas and even, I guess, Arizona can see the future, which is why they are trying to work out deals for legalization of the undocumented.