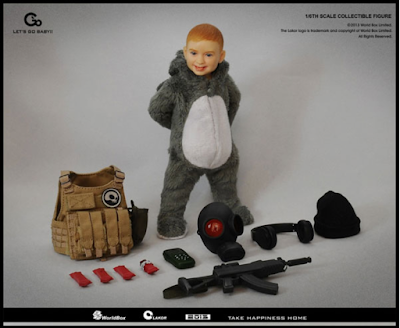 I found the above brain bomb just two clicks from the Drudge Report. Could it be purposeful on the part of that innuendo-slinging cyber-Winchell, busy fomenting post-Newtown "blood of tyrants" fears that the government is about to disarm the civilian population, to lead me almost directly to an image of a cute suburban grade schooler wearing a bunny suit, a gas mask, and several extra candy bar ammo clips to feed his assault rifle? Leave it to the gomi-no-gnomes of some fifth floor Tokyo action figure atelier to show us the what the Zeigeist really wants as the next step in the evolution of American insanity: arm the grade schoolers with really cute SWAT gear so they can defend themselves!

The network architecture was simple. Drudge featured an image of an action figure of the President, as one his baiting caricatures of the day. That led to this, which in turn led to this:

The little redhead kid's face appeared below picnic Prez as a thumbnail. Not sure why I clicked it, but I did, and got the rest of the story. "Let's Go Baby!" were the only words I could read on the Japanese-language page (not counting the red text indicating the item was 20% off for New Year's). The machine gave me its version of the rest:

Body that is 15 centimeters in height to be able to display along with the 1/6 figure is very cute!

While wearing a costume modeled after a rabbit fluffy, this time hard core style equipped with heavy machine guns and gas masks!

Also accessories such as anti-noise earphones and Tactical vest, gem of attention to detail that sticks!

I guess that suffices for what, but it barely scratches the surface of why. The action figure boutiques of Tokyo and Hong Kong have always been curious barometers of network culture's memetic undercurrents. They have a genius for uncovering lost Bronsons ready to be revived in a form that can stand on top of your television. After 9/11 they engaged in an almost real-time conversion of grainy photos of secret operatives on the ground in Spin Boldak hunting for Gandalf into the ultimate 1/6-scale adventure team. Perhaps now they are actually anticipating the newest additions to our semiotic pantheon before they exist in any other form. 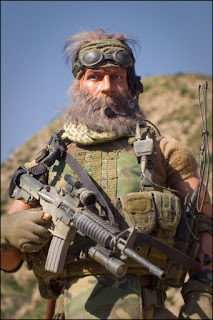 Or perhaps the artist behind this strange figure has, knowingly or subconsciously, tapped into some archetypal truth we don't ourselves perceive, encoding one of the seminal paradoxes of our identity: our romance of infantilized violence as one of the faces of freedom. Or maybe this kid isn't old enough to sing "I don't like Mondays." Posted by Christopher Brown at 10:31 AM