Late to the party

I'm something of a James Tiptree, Jr., fan. I first got ahold of some of Tiptree's stories back in my high school years, when I was voraciously reading anything and everything I could afford from the Science Fiction Book Club. My home town was too small to support a bookstore for more than a few days, and the library's science fiction and fantasy section was limited, to say the least. So when I plowed into something like "The Women Men Don't See" or "The Girl Who Was Plugged In," well, I didn't rightly know what to make of it. They certainly weren't classic Asimov or Clarke. They stayed with me, though, and eventually I learned about the whole Alice Sheldon subterfuge with her masculine alter-ego and CIA background. When I ran across her magnificent collection Her Smoke Rose Up Forever (Arkham House edition) at Adventures in Crime & Space's late, lamented brick-and-mortar location, there wasn't two seconds' worth of hesitation before I made it mine. 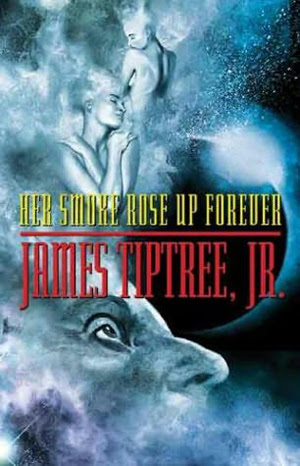 For all that, I don't know if I can honestly claim Tiptree as an influence on my writing with a clear conscience. I've written a grand total of one story that might tenuously be considered Tiptree-esque, and the jury's still very much out on whether that was time well spent or a failure of catastrophic proportions (at least until it's published at HelixSF a few months down the line). That's not much of a surprise, though, since our life experiences are almost entirely dissimilar. She was the pretty, only child of affluent, globe-trotting parents, making her first African safari before the age of 10. I was the adopted eldest child of an ag teacher in the middle of rural, farm-belt Texas. The closest I came to duplicating Alice Sheldon's African safaris was visiting the Lubbock prairie dog town in 1979. It wasn't until 1988 that I even ventured past the boundaries of my home state with a liquor-infused jaunt across the Rio Grande to Matamoros. That trip proved to be quite harrowing indeed--particularly when some acquaintances of mine thought it'd be fun to take an unguarded taxi for a joyride--but it doesn't quite compare. 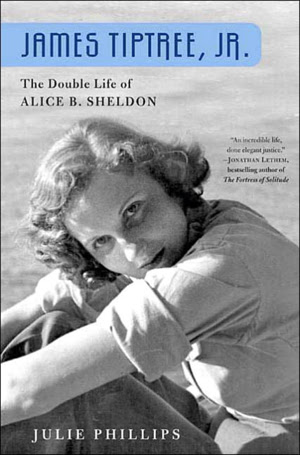 Such are the feelings of inadequacy I'm experiencing as I read Julie Phillips' James Tiptree, Jr.: The Double Life of Alice Sheldon. This is the book the internet was all abuzz over six months or so back. In my defense, I've never been an early adopter. Be that as it may, the book is as engaging and lively as popular sentiment would have it. Alice Sheldon did indeed lead a life worthy of Hemmingway--moreso, even, as Papa didn't have to contend with society's gender bias and sexual restrictions as did Sheldon. There are women before and since who have faced down these artificial barriers and made a name for themselves in a "man's world"--SF author Elizabeth Moon is one who comes to mind--but that doesn't diminish the significance of what Sheldon accomplished with her life during the era she lived in. To serve honorably during World War II only to be rewarded with open hostility from the general populace (not to mention the military itself) is... well, Vietnam is a parallel that's trotted out far too often for my comfort, but it does make one question our country's collective sanity, even when we're on the sides of the angels.

It also makes me question where I get off pretending to be a writer, when I haven't lived my life to the extent of those I admire. As a member of the oddly-named Generation X, I've been thankfully spared a defining (and psyche-scarring) major war, particularly when you consider the fact that Gulf War I turned out to be somewhat less dramatic than the opening weekend of deer season. There's been nothing of the nationwide hardship and self-sacrifice that were hallmarks of armed conflict throughout most of the 20th Century. These days, we wage war with comfort of the Stateside populace first and foremost on the federal government's agenda, with tax cuts galore as the cost of the war spirals. Such quaint notions as war bonds are left to the dust bin of history as we listen to daily podcasts from Kurdistan or read the latest blogs from Baghdad. These are my generation's defining moments--is it any wonder why Xers are a cynical, disillusioned bunch?

But as I read the Tiptree bio further, I see a glimmer of hope. In 1948 Sheldon and her husband Ting bought a chicken hatchery, and for several years made their living via poultry. Well, what do you know? I raised chickens growing up. Not a lot, mind you, but I gathered my share of eggs, battled thieving snakes and kept a eye out for chicken hawks, raccoons and other predatory types. At last, I've found a connection, something to hang my hat (if not my career) on! It may be tenuous and insubstantial, but at least it's something we share.

Unless you count the name thing. Sheldon wrote under a male pseudonym, and I--even though it's my real name--write under one that implies a gender of somewhat less masculine attributes than those I am rumored to posses. As an adult, I'm able to view the gender assumptions and confusion of people who only know me by my name as a curious and interesting phenomenon. I've had readers write me after reading my fiction, discussing some "obvious" point which, to them, was based solely on the notion that I am a woman. I greet these occasional letters with great fascination, because on a very real level the gender of an author may enhance or undermine the credibility of any particular story.

In any event, being an adult male with a feminine name beats the hell out of growing up as the slow fat kid with a girl's name. I take great solace in the fact that The Bionic Woman has long since left the broadcast airwaves. I assure you, friends and neighbors, the years of 1976-1978 were not good ones for me. Is that pop culture trauma Tiptree worthy? Not in the least. But it's the best I've got, so it'll have to do.