Catching up with Angry Old Men 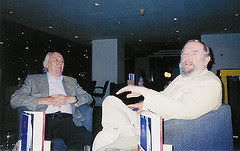 Simon Sellars of Ballardian has a great interview up this week with Michael Moorcock on his and Ballard's pioneering work of the 60s and their observations on the present scene. Great stuff, like:

Their perspective on Burroughs:

"Jimmy and I were both great fans of William Burroughs. We weren’t so much influenced by him as inspired by him. We were also interested in condensing narrative, of finding forms which would enable us to carry as many narratives as possible in as short a space. We were, I suppose, anti-modern rather than post-modern. Our ideas didn’t come out of academia. They were answers to the problems of working writers trying to find the best ways of dealing with our particular experience. Burroughs pointed the way, as we saw it." 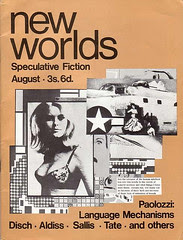 And their perspective on the contemporary scene:

"Like Jimmy, I think I’ve grown angrier and more radical in most respects as I’ve grown older. We’re both as disgusted with what’s going on in politics and business as we ever were. I just did a ‘fighting editorial’ for Interzone, calling on writers to take the kind of risks Burroughs (from whom Interzone took their title) took. The kind of risks Ballard took, for that matter. We’re living in cautious, retroactive times and I think we need to make an effort to resist what we too easily accept as the zeitgeist. I know this is also how Jimmy feels. I don’t think either of us is especially nostalgic or querulous, but it’s comforting to know that when we get together we’re a couple of Angry Old Men with as much invested in the present and, indeed, future as we ever had." 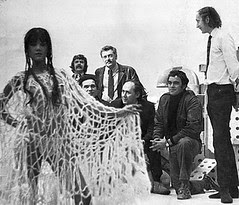 Feeling very strange is fun in an aesthetic decadent way, but the Old Ones pose a fair question: where are the real SF literary risk-takers today?
Posted by Christopher Brown at 10:01 PM