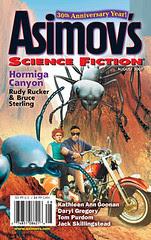 In the August 2007 issue of Asimov's, cyberpunk grandmasters Rudy Rucker and Bruce Sterling collaborate on a hilariously fun story that dollops out duelling SF power chords like the genre equivalent of a riff-off between Frank Zappa and Joe Walsh. "Hormiga Canyon": take one part Jan-Michael Vincent dirt biking across the post-apocalyptic desert in Damnation Alley (with a wonderfully incongruous strand of Renaissance Faire DIY chainmail), one classic cyber-trickster, mix them with the Mythbusters guys, then throw them into a gnarly southern California desert that discovers the Calabi-Yau lurking beneath the milieu of Carlos Castaneda and the Warner Bros. backlot of Them! Yes, it's a giant ant story.

"A colossal ant burst from a ticket of manzanita, bearing three fierce-looking natives. The riders were clutching the ant's insectile bristles like Mongols holding a horse's mane. They were deeply tanned men with filed teeth, floppy hair, and bizarre patterns painted on their faces. Original Californians.

"The Tongvans sprang at Jayson and Stefan; second later the boys were swathed in woven nets, wrapped up like pupas side by side.

"The largest Tongvan leaned over Stefan. He was a wiry, dignified gentleman just over five feet tall. He'd painted an intricate pattern of fern-like scrolls around his eyes and mouth. He had a deeply skeptical, highly judgmental look, very much like an overworked immigration officer at LAX."

Highly recommended -- the perfect smart silly summer matinee for your favorite sofa, a buttered popcorn path to the Nagual. Check it out. The first third of the story is up on the Asimov's site for your reading enjoyment.
Posted by Christopher Brown at 1:31 PM