Saturday Matinee with Marxists in Space 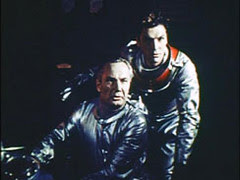 Thanks to the Austin Film Society's outstanding summer series, "Other Worlds, Other Minds: Global Sci-Fi Cinema," I had the good fortune this week to catch a screening of The Heavens Call (Nebo Zovyot), a gorgeous Russian mission to Mars film from 1959.

A Soviet state art project directed by Mikhail Karyukov and Aleksandr Kozyr, the film is a kind of Cold War bookend to Destination Moon (with a healthy dose of 2001). Instead of Heinlein's libertarian dream of a private entrepreneurs building the rocket for parallel goals of profit and progress, Heavens Call tells the story of dedicated technocrats working to propel their socialist utopia into the solar system, with their giant ship "Motherland" bound for the Red Planet. The leader is Kornev, a benevolent, patriarchal elder who never loses his cool and can be consistently relied upon to have just the right selfless philosophical utterance for every situation.

Unfortunately, their ideologically pure mission is screwed up by a competing American mission that could be operated by the same guys behind Destination Moon -- "The Mars Syndicate," selling canalside lots for $10 an acre, with their fast rocket "Typhoon" piloted by astronaut "Mr. Clark" (a Chuck Yeager analog famous for his masterful emergency landing of a wild rocket in El Paso, played by a silver-haired brick of a Russian with actual divots in his face and the tangible gravitas of a hero of Stalingrad) and accompanied by a glib dilettante celebrity broadcaster. When the Americans, in their greedy rush, end up falling toward the sun, the selfless Russians abandon their mission to save the misguided capitalists, then find themselves stranded without fuel on the asteroid Icarus. As they stand in a cubist variation on a Chesley Bonestell spacescape, watching the ripe red planet rise before them, co-pilot Andrei voices the tantalizing frustration of their near miss, to which Kornev replies that the next mission will be more successful because of this "useful lesson in the consequences of useless competition." 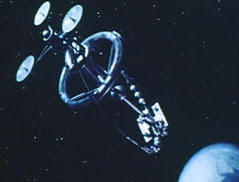 Visually, the film is stunning, from the majestic slow dance of the rocket launch that plays like a Tchaikovsky ballet version of Gerry Anderson's Thunderbirds, to the pre-Kubrick rotating space station/platform (open to all members of the human race without discrimination or fee -- sorry, no Hilton and no Pan Am here), to the crazy futurist landscape of the asteroid. The ordered beauty of the Soviet utopia, with its beautiful thick happy people moving through time and space and labor and love with mellow grace and lots of Theremin music, is best illuminated when interrupted at the end of Act II with the appearance of the Yankees: Times Square! Neon! Boogie woogie! Cars! Celebrities! Private property!

The narrative contrast is ultimately the more powerful one: Thoughtful socialists like Kornev don't need happy endings. Or, the success of *cooperation* between the Russians and the Americans is more important than achievement of the scientific mission objective -- which makes the celebratory return of the astronauts, righteously riding the waves in an open motorboat to meet the roaring crowd of family, workers, and uniformed Young Bolsheviks, all the more emotionally vivid and real. It's fun to imagine other Hollywood genre archetypes repurposed in a similar fashion. Of course, as previously noted in this space, you are hearing this from a guy who is nostalgic for the lost dream of utopia in our excessively pragmatic, ideologically bereft age. 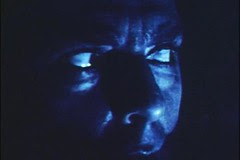 The film is touring with several other Soviet SF pictures as part of Seagull Films' "From the Tsars to the Stars: A Journey Through Russian Fantastik Cinema," so keep an eye out for it (or get some folks together to bring it to your local repertory house).

(Or, if you're desperate, you can pick up the bastardized American version, Battle Beyond the Sun (1962), in which Roger Corman hired a young Francis Ford Coppola to recut the film as a Northern Hemisphere v. Southern Hemisphere thing, complete with attacks by vagina dentata space monsters.) 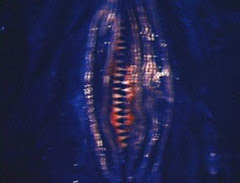 And if you're in Austin, you can check out anime apocalypse Akira next week or the awesomely titled To the Stars by Hard Ways the week after, which is surely worth it just for this mysterious lost android alone. 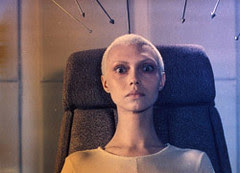 Posted by Christopher Brown at 9:28 AM