Over at Do the Math, jazz pianist and cultural omnivore Ethan Iverson of The Bad Plus has a No Fear of the Future-worthy encyclopedic post regarding the Tom Baker years of Doctor Who, the full run of Buffy, and the unexplored overlaps between the two. How Ethan manages to crank out bunker busters of the brain like this while touring the world to promote his band's new album, Prog (which you must buy if you haven't already -- totally ass-kicking piano trio covers of Tears for Fears' Everybody Wants to Rule the World and Rush's Tom Sawyer, along with some Bowie, some Bachrach, and bassist Reid Anderson's percussive masterpiece Physical Cities) only his nutritionist knows. 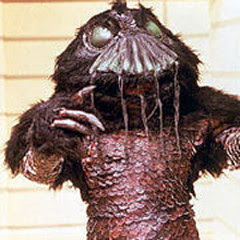 Especially brilliant is his disquisition on the strange pleasures of reading overthought analytical works regarding our favorite pop cultural comfort food:

'We all have guilty pleasures. One of mine is reading the analytical books about TB and BTVS. This is from chapter four, "Send up: Authorship and Organization," from Doctor Who: The Unfolding Text by John Tulloch and Manuel Alvarado (this is the chapter about TB):

"The disagreement over audiences and dramatic values between [Graham] Williams and [John] Nathan-Turner itself raised quite dramatically the ways in which and institution like Doctor Who can vary according to different production and professional practices. This chapter will look at ways in which variations within professional ideology materially affect production practices; and further, at ways in which professional values that are ostensibly identical can themselves be inflected differently according to pressure from within and outside the television industry."

'And this is by Neal King, from his essay "Brownskirts: Fascism, Christianity, and the Eternal Demon" from the anthology Buffy the Vampire Slayer and Philosophy: Fear and Trembling in Sunnydale:

"The quasi-fascist philosophy that justifies Buffy's slaying concerns me in my next discussion. I will outline the show's cosmology and by doing so, set up my imaginary Buffyverse, just to make my point about the show's potential for fascism. I conclude with a better solution to this problem, one that stretches credulity less and eliminates the show's nasty streak of racism. The important characteristics of the existing Buffyverse that prime it for fascism include elements of a Manichean racism (tempered by an Augustinian division of the world's evils), adherence to primal and state authority, and formation of citizenship in ritual combat. I consider these in turn."

'These are absurd pursuits, but nonetheless, if you want to keep me quiet and absorbed, just give me a new book of TB or BTVS analysis and you won't hear from me for several hours. In fact, that chapter in the Tulloch/Alvarado is one of the most interesting things I have ever read. The book as a whole is swollen with overly turgid prose, but in that chapter the great Douglas Adams is interviewed extensively in counterpoint with producers Williams and Nathan-Turner, and it gets quite gritty and revealing! As far as Buffy and fascism goes, I have never studied philosophy. Someone who has will undoubtedly protest that I need to actually read Augustine for real, but, I assure you, that is not going to happen. Fear and Trembling in Sunnydale is the closest that I am ever going to get.' 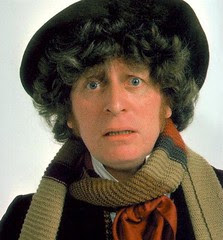 Posted by Christopher Brown at 9:45 PM