Tonight I caught the new print of Blade Runner: The Final Cut. Which causes me to wonder how many different versions of this film I have seen. The encyclopedia claims there are seven versions, of which I have seen at least five. The original 1982 theatrical release, with the expository Marloweian voiceover and the happy ending driving through the pines (apparently stock footage stolen from Kubrick's The Shining). The myriad hacked up television broadcast versions. The 1991 unofficial director's cut. The 1992 official Director's Cut. And this new "Final Cut," with a spiffy unicorn dream sequence that, tied up with Gaff's tinfoil origami in the final scene, definitely resolves the issue of Deckard's status as a replicant. At least, until the next cut comes out, perhaps around the time of the movie's setting in 2019.

The media barrage over this latest edition, shilling DVDs to put under the tree of your favorite middle-aged veteran of Reagan's first term, confirms the movie's status as canonical. As did the crowd at the screening at Austin's own WWI-era downtown movie palace. A full house of wired Bohemians, many of them born after the film's release, the rest of them applauding and cheering the opening credits like some post-cyberpunk Rocky Horror experience. Make it a double feature with The Road Warrior and you would pretty well cover the cinematic zeitgeist of my late adolescence. I took my 12-year old son and his buddy, figuring at this point the thing qualifies as an educational experience. While their whispers revealed they had the plot's punchline telegraphed well before the first unicorn, the pixel-free cinematography and old school effects blew their minds.

It holds up well despite a number of viewings that approaches my Stairway to Heaven listening count. The early exposition, as Bryant explains the setup to Deckard in a baffling mandatory science fictional As You Know, Bob, gets creakier every time, but the thing sails from there, carried by style and details that dress up the pulp skeleton of the plot. Like the three-dimensional photos from 1187 Hundertwasser, Deckard's suit and tie, Roy's fingernails, Pris's airbrushed harlequin mask, Zhora's political homicide dossier, Rachel letting down her hair, the backwash of blood into a battered man's shot glass. And the city, the movie's real star, in all its smoking, gasping, damp, drizzly, dark, Adbusted, multiculti, grimy, run-down L.A. meets 1979 NYC by way of 1980s Tokyo and future Shanghai. Old school soundstage and gnomic models inventing imminent dystopia through noir lighting and Vangelized muzak flickering on a big screen: the essence of cyberpunk, like Neuromancer being written on a typewriter. 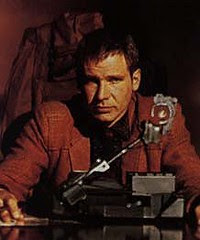 Which makes you wonder why no one has really pulled off anything similar since, in the cinematic varietal of the genre. Robert Longo's Johnny Mnemonic, anyone? I think I now understand the answer. Blade Runner is the only true cyberpunk film, and there need be no others, for there will continue to be infinite cuts, each with subtle variations, same wines of different vintages. Like a Borgesian Heavy Metal cartoon, its attentive custodians and itchy auteurs forever modulating the space between the panels.
Posted by Christopher Brown at 10:51 PM

Yeah, that pretty much sums it up. Everyone was working at the top of their game when they made this movie. I can't believe they're not jamming the scene in the hospital with Holden into The Final Cut, though.