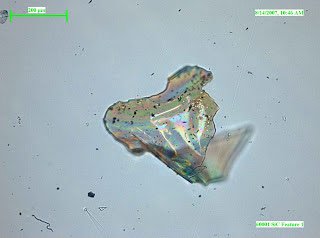 NASA's Genesis Discovery Mission returned particles of solar wind to Earth a couple of years ago. You may recall that Genesis had a rather hard landing. Most of the solar wind collectors broke into larger or lesser pieces. But the collectors had solar wind particles embedded in them; Genesis did bring back its prize. In so doing, it opened up fascinating questions. How do you tell the difference between genuine extraterrestrial material and unwanted contamination in consequence of a crash landing in the Utah desert? How do you document and distinguish atoms of solar wind from traces of a) spacecraft, b) Utah, or c) the residue solvents used to clean off a) and b)? Inventive NASA scientists are developing incredibly sophisticated techniques to document the contamination and clean the pieces.

Starting early on, choice pieces of collector material with embedded solar went to scientists around the world. The first Genesis science results were announced at the Lunar Planetary Conference in 2006. The last results could unfold in the mid 21st century or even later. The beauty of curating extraterrestrial material is that it's safely tucked away while analytic instrumentation evolves and the planetary science community hones new questions and approaches. The Apollo moon rocks have whispered their secrets to scientists for almost 40 years.

The Genesis samples are a lot smaller than moon rocks and the contamination issues orders of magnitude more subtle. Thus there's been a lot of high resolution microscopy. Here, courtesy of the Genesis Discovery Mission's contamination control lead scientist, are some interesting images.

1. Above and one below are two takes on a scrap of Kapton tape. At the macroscopic level, this is translucent, light-gold-colored tape that's ubiquitous on American-built spacecraft, especially securing dark gold sheets of mylar. Kapton is like masking tape for spacecraft. In microscopy in the wake of a spacecraft crash, it this is what it looks like. This stray bit of tape resides on silicon carbide collector material. 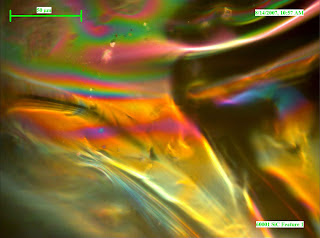 2. The blue stuff is salty Utah mud with a cementlike consistency. Cleaning it off silicon carbide is a challenge. 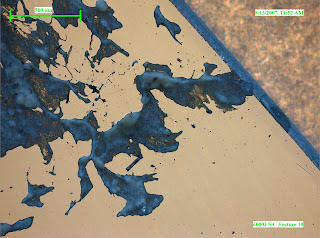 3. The bubbles haven't yet been conclusively identified. But they look cool. 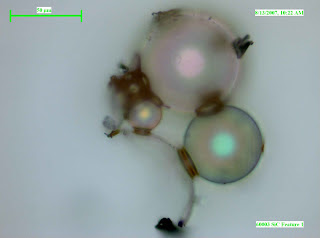