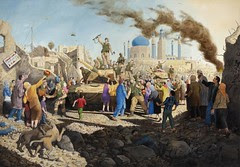 On this somber holiday, consider an alternate present from painter Sandow Birk -- The Liberation of Baghdad.

Absolutely brilliant. The irony may be just a bit too understated for American jingoist lunkheads, but straight-faced sincerity is a sine qua non in this kind of Dada kunstkrieg.

Reminds me very much of Laibach and NSK.

The Anthems album is a very good cross section of their work from early art-noise to smooth 21st century agit-pop. I recommend that as the best starting point.

They have quite a discography. Early works like The Occupied Europe Tour and MB December 21 capture their proto-industrial sound. Lots of Josip Broz samples to be found.

Let It Be is middle Laibach: a complete reimagining of the Beatles last album. Sympathy for the Devil and Life is Life date from around then: superlative, Volkish, bruitalistic covers of Western pop-faves. If they ever united with Paris Hilton, we would not stand a chance.

Jesus Christ Superstars is a heavy-metal exploration of religion. Listen to it on 11. NATO was their response to the war in Bosnia. It's a very good album, though I think the horror is almost understated. WAT is Laibach in it's most modern glory, post 9-11. It's a lot less cover driven, or at least the satiric re-purposing of covers is more thorough.

Those are the main albums I've listened to.

You should check out the essays and early interviews (a real scream)on http://www.nskstate.com/index.php. It is the site for the Neue Slowenische Kunst collective (Laibach is the propaganda arm). It's an art collective with its own global state. They issue passports too.