The Cuban street finds its own uses 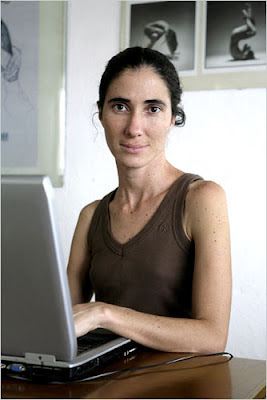 HAVANA — A growing underground network of young people armed with computer memory sticks, digital cameras and clandestine Internet hookups has been mounting some challenges to the Cuban government in recent months, spreading news that the official state media try to suppress.

Yoani Sánchez, 32, and her husband, Reinaldo Escobar, 60, established Consenso desde Cuba, a Web site based in Germany. Ms. Sánchez has attracted a considerable following with her blog, Generación Y, in which she has artfully written gentle critiques of the government by describing her daily life in Cuba. Ms. Sánchez and her husband said they believed strongly in using their names with articles despite the possible political repercussions.

Because Ms. Sánchez, like most Cubans, can get online for only a few minutes at a time, she writes almost all her essays beforehand, then goes to the one Internet cafe, signs on, updates her Web site, copies some key pages that interest her and walks out with everything on a memory stick. Friends copy the information, and it passes from hand to hand. “It’s a solid underground,” she said. “The government cannot control the information.”

It is spread by readers like Ricardo, 28, a philosophy student at the University of Havana who sells memory sticks to other students. European friends buy blank flash drives, and others carry them into Cuba, where the drives available through normal channels are very expensive and scarce.

Like many young Cubans, Ricardo plays a game of cat and mouse with the authorities. He doubts that the government will ever let ordinary citizens have access to the Internet in their homes. “That’s far too dangerous,” he said. “Daddy State doesn’t want you to get informed, so it preventively keeps you from surfing.”
Posted by Christopher Brown at 7:15 AM

That's fantastic. I love it when technology aids instead of imperils underground movements.