Havin' a ball... with lightning 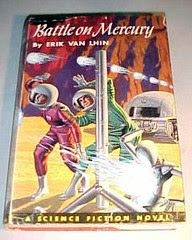 If you're like me (and who isn't?) then you find ball lightning a fascinating phenomenon. Maybe it's because the first science fiction novel I read as a kid was Battle on Mercury, a truly fun young adult novel from the old school Winston Science Fiction line. It had all the key elements needed for a crackin' good SF yarn--grizzled space prospector, snazzy space suits, rocket ships, a robot (indispensable, that) and a life-or-death crisis driving the plot. But what really put it over the top was the presence of not one, but two species of intelligent ball lightning living on Mercury's singularly inhospitable surface. Wispies (from Will o' the Wisp) and Demons they were called, and I'll never forget them--certainly not the main wispie, cleverly named "Johnny Quicksilver." Sounds like a Golden Age DC Comics super-hero, doesn't it?

But the terrestrial ball lightning phenomenon is poorly understood at best, with conflicting and competing hypotheses on its origins and manifestation. Fortunately, one of the good things about working at a university is hearing about cool research going on in obscure areas. Case in point: Karl Stephan, who's developed a method to create captive ball lightning in a laboratory setting. 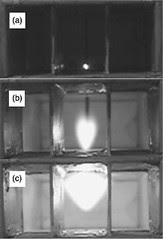 Stephan's interest in crafting this experiment sparked when he read about researchers in Tel Aviv University who were able to create objects with the same characteristics as ball lightning. He worked in conjunction with University of Texas at Austin professor John A. Pearce, who also directs the Process Energetics Laboratory at UT's Pickle Research Campus.

Ball lightning differs from ordinary lightning in that it takes the form of a glowing ball that ranges in size from a softball to a beach ball and it lasts several seconds or more. This phenomenon of nature is often sighted with thunderstorms and has the ability to hover, float down chimneys, pass through closed windows and either disappear in silence or in a sudden explosion.

Stephan found that he could produce the "fireballs" by touching two tungsten welding rods together and drawing them apart with microwave power applied to the system. When the rods are moved apart, the effect produces a fireball that persists as long as the microwave power is applied and disappears when the energy source is shut off. The importance of this experiment is that it can explore the conditions needed for a ball-lightning object to exist in the air, thus contributing to the understanding of this mysterious phenomenon.

Stephan's paper from the November issue of Physical Review E is available online here, but unfortunately one needs either to buy the individual article to read it in its entirety, or have a pre-existing subscription to the journal (which I fortunately have via Texas State). That's the bad news. The good news (and very good news it is, indeed) is that videos of the lab work mentioned in Reference 11 of the paper are available online without a subscription and can be accessed at the links below. Enjoy!