For the past couple of months, I've been undergoing total Rocky Horror immersion, culminating over the weekend with the arrival of the 15th Anniversary boxed set. Four discs: The Rocky Horror Picture Show Soundtrack, The Rocky Horror Show: Original Roxy Cast, Rocky Horror International and Songs from the Vaults: A Collection of Rocky Horror Rarities. I wanted this set desperately when it was first released way back when, but the $40 price tag at the local Camelot Music was too steep for my threadbare student budget. Thanks to the miracle of eBay, I finally got my own copy for the bargain price of $9. Yes, I did go through a Rocky Horror phase in my misspent youth, but haven't participated in the mayhem in more than a decade. Hadn't even heard any of the songs save for an occasional airing of "The Time Warp" on the Dr. Demento Show. So why the sudden change? 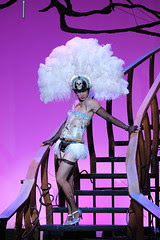 I blame the Texas State University Theatre Department, which recently completed a sold-out two week run of The Rocky Horror Show, directed by Jay Jennings. I wrote an in-depth article on the production for HillViews, the alumni/university magazine, and extensively interviewed Jennings and some of the cast members in the process. My wife and I got tickets and took in the show as well--and a dazzling, spectacular show it was. You know you're in for a ride when the production values of the stage play are far superior to the better-known movie. The costumes alone were worth the price of admission--it was as if Las Vegas exploded and the glitziest, tackiest contents of all the showgirl wardrobes landed in San Marcos. Micah Sudduth, who played Frank-N-Furter, boasted some of the most elaborate costume changes, going from the traditional black corset and fishnets made famous by Tim Curry to the virginal white ostrich-plumed monstrosity (see left) for the big "Floorshow" sequence.

What I found amazing was the fact that while the plot and overwhelming majority of the dialog in the play (save for the song "Once in a While") was identical to the film the two really couldn't be more dissimilar. The Texas State version was downright hilarious, whereas the film is absurd at best, funny only through the catcalls and antics of the audience. It all comes down to interpretation of the material, which is, once you get down to it, what Rocky Horror is all about at its core. Rocky Horror is a science fiction narrative, but ask anyone and all they'll remember is the overwhelming amount of cheese on display (okay, okay--what they'll really remember is all the sex. But it's cheesy sex). Yet once you get past all the cornball 1950s B-movie sci-fi trappings and post-60s sexual boundary pushing, Rocky Horror is a simple retelling of the Frankenstein archetype (much as Forbidden Planet is a retelling of Shakespeare's The Tempest or Strange Brew is of Hamlet).

"Hollywood has done over a hundred different films on Frankenstein, the 'creating the monster' myth," said Jennings. "In almost all of them, the monster turns out badly. I'm going with the premise that the reason that they turned out badly is because (the monsters) are all just technically inspired. So we've added the myth of the Great Feminine, since Frank-N-Furter is both male and female. His monster turns out pretty, at least. We've added that to the creation myth, and the creation myth to the technology." 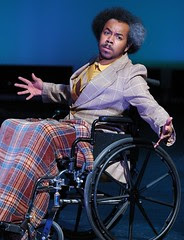 One of the CDs in my recently-acquired box set is Rocky Horror International, which is, appropriately enough, a kind of patchwork assemblage of a soundtrack made from pieces acquired from disparate productions. There are performances from the original London cast (not too terribly different from more familiar versions, since Tim Curry starred here as well), as well as Australian and New Zealand productions. These Anglo productions are essentially lighter shades of pale--each unique, but none diverging too far from the established baseline. The Norwegian performance of "Alltid Lys Hos Frankenstein" ("Over at the Frankenstein Place") is most definitely not the same old, same old, and if there were any justice in the world, the Norwegian version of the Charles Atlas Song, "Muskellmann Sangen," would replace the English version in all subsequent performances of the stage play in the U.S. and its territories. As brilliant as the Norwegian is, however, it doesn't approach the sublime inspiration of the Mexican cast recording. A glorious four tracks from the Mexican soundtrack are included, and for my money, that's 11 too few. Meatloaf's anthem, "Hot Patootie," is recreated as "¿Que Le Ha Pasado El Sabado?" complete with the original lyrics in the refrain, "Tooty fruity! Live it up!" The infamous "Touch-a Touch-a Touch Me" is particularly effective in translation as "Toca Toca Toca Toca," and even those who never took Spanish in high school should be able to sing along without too much strain. I'm serious, folks. It is now one of the (many) driving goals of my life to see a live production of this thing performed entirely in Español. There's bound to be something like this down in San Antonio...

Interpretation. That's the key. One simple, unremarkable example of source material given new life and possibilities by virtue of different spin and interpretation. Probably no single element of the play symbolizes the divergence of vision so much to me as the song "Eddie's Teddy." In the movie, Jonathan Adams' portrayal of a wheelchair-bound Dr. Everett Von Scott is more than a little evocative of Peter Sellers' Dr. Strangelove. In Texas State's take, however, Dr. Scott, as played by Kelley Harmon (above right), couldn't be more different.

"(Music director) Gordon Jones, he took a different approach to the song," explained Harmon. "We're bringing a more gospel feel to it, a real down-home, soulful, Southern Baptist gospel approach. It's something nobody's ever seen before--he reorchestrated the whole thing. It's not going to sound like any other production."

And it didn't. That Deep South spiritual approach blew away the camp elements--if only for a moment--and gave the number a gravitas it didn't have before. When Dr. Scott's solo ends and the rest of the cast comes in to sing, the tempo shifts to more of a Motown-inspired style, and that works on every level. What was old is new again. What was camp is now classic. There are no new ideas, or so the truism goes, and for a writer that can be a depressing prospect. But the fact that a finite number of ideas can inspire an infinite number of variations... that is where the challenge lies.
Posted by Jayme Lynn Blaschke at 10:48 AM

I used to love The Rocky Horror Picture Show, until I saw my first live production back in the 80s. Even the lesser stage productions I've seen since then have been funnier than the movie.

I still watch the film occasionally out of nostalgia, but I no longer do so in costume. Since growing the beard, I'm just that much less convincing as Frank N. Furter.

I never did the costume thing--that didn't take hold at A&M, cultural backwater that it is, until I'd graduated. But I'd hurl abuse at the screen with gusto, fling toast through the air and flick my Bic at all the appropriate times.

I mean, Rocky Horror Picture Show is fun because it's bad and the audience gets to partake in the mayhem, but the stage production is on a whole other level. Whoda thunk it? No wonder stage fans call those who've only seen the film "Masturbators."

Jayme, that box set was my birthday present from Rick & Brandy this year. You are correct--the Finnish cast rocks. But I also enjoy the songs by the movie cast that were cut from the film.