What's Under the Anorak? 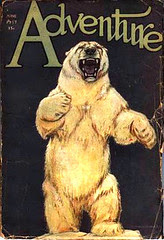 When I was a kid, Christmas shopping involved trips to Chicago. After hanging with the in-store magician at Marshall Field's, Dad would usually drag us down to the Abercrombie & Fitch store on Wabash.

This did not involve waxed abs on billboards. It was a time portal into a now lost prewar world of the great white hunter. A gentlemen's excursion outfitter, the kind of place where a 1930s pulp hero would get his gear for an expedition to find a lost city in the Amazon or hunt the killer Yeti on the road to Shangri-La. Guns, mackinaws, and old school snowshoes. A Gore Tex-free zone of leather, fur and cordite. The place where young Hemingway stopped before heading up to Michigan and Teddy Roosevelt shopped for his African hunts. (There was another one on Madison Avenue in New York across from the original Brooks Brothers, enabling one-stop shopping — it even had a shooting range in the basement.) 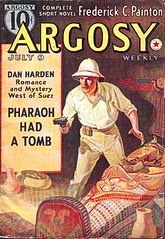 We all know what the brand is now — half-naked twenty year olds displaying their shellacked, machined Apollonian bodies across every bus stand and billboard in urban America, the ultimate commodification of American teen sexuality. The taciturn WASPs of Ralph Lauren's 1980s appropriation of prep after they take off the ties and more: stoned, liberated and vacant. A consumer culture meme so powerful that its product placement rates its own review by Times TV critic Virginia Heffernan.

"No catalog models were harmed in the making of this film." 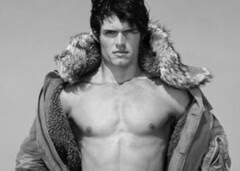 The Economist just scratches the surface of what's going on here when it argues Madison Avenue has coopted Continental crit and mixed it in a cocktail with a little von Hayek — "Post-Modernism is the new black." Consider how pop semiotics interrelates with the longstanding American insistence on each individual's freedom to reinvent himself (the founding motive force driving Benjamin Franklin's autobiography), and it starts to make more sense.

How does a place for fat middle-aged white businessmen to buy itchy anoraks morph into an existentially vampiric project to enslave their great grandchildren in a subconscious servitude of hypersexualized consumerism? By selling compelling new identities for all-American weekend hedonists.

There's a self-evident family tree at work here. The original early '80s Banana Republic, where, for a period of time, you could buy an honest to god pith helmet to transform trips to the grocery store into an adventure worthy of Haggard. At the same time, Ralph Lauren sexualized the buttoned down attire of bond traders and their children, conquering Middle America with an invasion of magazine models recruited from an anachronistic Fairfield County of the imagination. And then J. Crew appeared, each catalog a visual narrative of the fantasy weekend chino orgies those kids invented while their dads were away at the Bohemian Grove and their moms at the spa with Martha. Through to today, where we see the complete triumph of surface over substance.

One wonders what the Chinese slaves who make these pre-distressed garments think of it all.

What do you do with a generation of overgrown mall kids weaned on hormonal chicken and Diet Coke, their brains wrapped in stonewashed denim and clogged up with dreams of body wax? 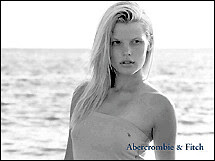 Might they make the perfect troops for our new 21st century wars, next generation ambassadors of our way of life, reinvigorating their frontier hunter heritage with vintage gunmetal? Envision the shirtless wonder boys with night vision goggles and assault rifles, gleefully spelunking the dark corridors of Sadr City and the wintry Stalinist tombs of Pyongyang, collecting each other's beautiful body parts from the battlezone, their post-Teutonic female counterparts interrogating enemy combatants in pink and green Abu Ghraibs, playing pick up soccer with severed heads in the base camp. Imagine the recruiting posters looming over your freeway commute.

If suburban kids dressed in Baudrillard's latest designs can succeed in making it real by starting their own fight clubs, isn't parachuting them in to take it to the Mooj a natural evolution of things? We await the platoons of photogenic special forces in elegantly ragged camo cargo pants, accompanied by their embedded fashion photographers and funded by next generation military-industrial-consumer product placement, bringing a new order to the world: Pax Abercrombie.
Posted by Christopher Brown at 10:22 AM

"What do you do with a generation of overgrown mall kids?"

Why, you ship 'em in to nuke more bugs!

Your post reminded me very much of Verhoeven's Starship Troopers...

Do you have time for that remarkable Dutchman, Chris?

Simon--Absolutely. Verhoeven's repurposing of Casper van Dien as crypto-fascist uber-trooper was ahead of its time. Though Heinlein's original has a good bit more gravitas.