If Bill Evans grew up in the Corn Belt watching reruns and listening to FM radio, he might have had something to add to The Bad Plus. Maybe it's a Midwestern thing, but in my book you can't beat these guys for the perfect cocktail of earnest irony (with solid musical craft). The single cover on their last album, "(Theme From) Chariots of Fire," exploded that Vangelis craptacular into a resonant manifesto of identity like Paul Harvey channeling Hamid Drake. Now, a "massively deconstructed version of Rush's 'Tom Sawyer'"? If only one could produce the literary equivalent of such nuggets of post-pop genius. 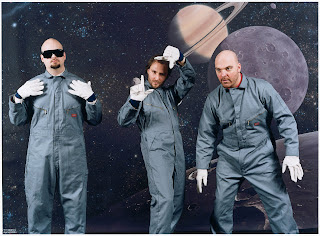 The Bad Plus Announce May 8 Release of 'PROG'

Do The Math and Heads Up International are proud to announce the release of the new record by sound-pioneering trio The Bad Plus. Entitled "PROG," the record will be released on May 8.

Neither progressive jazz nor progressive rock, "PROG" is the first record on the band's own imprint Do The Math, and it firmly keeps the band on its iconoclastic trajectory, forging a sound that defies any easy definitions or categories. "PROG" is the group's fifth studio album, following 2001's The Bad Plus (Fresh Sounds); 2003's These Are The Vistas; 2004's Grammy-nominated Give; and 2005's Suspicious Activity (all three on Columbia/Sony).

The Bad Plus hovers in a singular space between indie rock, postmodern jazz and intelligent pop. The trio's highly acclaimed albums and accompanying reputation for adventurous live performances serve as a testament to their progressive sensibilities. In less than a decade, bassist Reid Anderson, keyboardist Ethan Iverson and drummer David King have forced critics, fans and everyone in between to re-think their perceptions of jazz, rock and music in general. The "Los Angeles Times" ranks the Plus "among the potential leaders of what might be called the Nu Jazz movement - an eclectically blended, acoustically framed, dynamically powerful variation on mainstream jazz." "Rolling Stone," meanwhile, heralded them in more simple terms: "...bad to the bone, hot players with hard-rock hearts..."

"Like everything we do, this record brings together a lot of different influences, without drawing any lines around one style or another," says Anderson. "We don't create barriers. It's all brought together with a very open mind. We'll try anything, as long as it makes good music."

On the record, The Bad Plus tackle four covers: renditions of Tears For Fears' "Everybody Wants to Rule The World" and Burt Bacharach's "This Guy's In Love With You" along with massively deconstructed versions of Rush's "Tom Sawyer" and David Bowie's "Life On Mars." As is now a Plus tradition, the covers frame the band's six original compositions, including the powerful "Physical Cities," a stunning new ballad, "Giant," the final installment in their paean to athleticism, "1980 World Champion," and the intricately angular "Mint."

(As if that weren't enough, they are Bill Crider freaks on top of it)
Posted by Christopher Brown at 9:12 PM