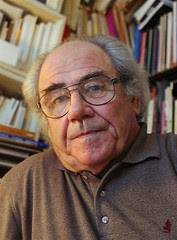 As cogently noted by Simon Sellars at Ballardian, Baudrillard had prescient observations about science fiction as the only true literature of the hyperreal present:

"We can no longer imagine other universes; and the gift of transcendence has been taken from us as well. Classic SF was one of expanding universes: it found its calling in narratives of space exploration, coupled with more terrestrial forms of exploration and colonization indigenous to the 19th and 20th centuries. There is no cause-effect relationship to be seen here. Not simply because, today, terrestrial space has been virtually completely encoded, mapped, inventoried, saturated; has in some sense been shrunk by globalization; has become a collective marketplace not only for products but also for values, signs, and models, thereby leaving no room any more for the imaginary. It is not exactly because of all this that the exploratory universe (technical, mental, cosmic) of SF has also stopped functioning. But the two phenomena are closely linked, and they are two aspects of the same general evolutionary process: a period of implosion, after centuries of explosion and expansion. When a system reaches its limits, its own saturation point, a reversal begins to takes place. And something happens also to the imagination.

"Until now, we have always had large reserves of the imaginary, because the coefficient of reality is proportional to the imaginary, which provides the former with its specific gravity. This is also true of geographical and space exploration: when there is no more virgin ground left to the imagination, when the map covers all the territory, something like the reality principle disappears. The conquest of space constitutes, in this sense, an irreversible threshold which effects the loss of terrestrial coordinates and referentiality. Reality, as an internally coherent and limited universe, begins to hemorrhage when its limits are stretched to infinity. The conquest of space, following the conquest of the planet, promotes either the de-realizing of human space, or the reversion of it into a simulated hyperreality. Witness, for example, this two-room apartment with kitchen and bath launched into orbit with the last Moon capsule (raised to the power of space, one might say); the perceived ordinariness of a terrestrial habitat then assumes the values of the cosmic and its hypostasis in Space, the satellization of the real in the transcendence of Space—it is the end of metaphysics, the end of fantasy, the end of SF. The era of hyperreality has begun.

"From this point on, something must change: the projection, the extrapolation, this sort of pantographic exuberance which made up the charm of SF are now no longer possible. It is no longer possible to manufacture the unreal from the real, to create the imaginary from the data of reality. The process will be rather the reverse: to put in place "decentered" situations, models of simulation, and then to strive to give them the colors of the real, the banal, the lived; to reinvent the real as fiction, precisely because the real has disappeared from our lives. A hallucination of the real, of the lived, of the everyday—but reconstituted, sometimes even unto its most disconcertingly unusual details, recreated like an animal park or a botanical garden, presented with transparent precision, but totally lacking substance, having been derealized and hyperrealized."