On February 1, 2005, the Associated Press reported the following:

"BAGHDAD, Iraq (AP) - Iraqi militants claimed in a Web statement Tuesday to have taken an American soldier hostage and threatened to behead him in 72 hours unless the Americans release Iraqi prisoners. The U.S. military said it was investigating, but the claim’s authenticity could not be immediately confirmed. 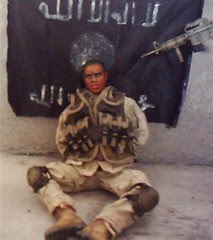 "The posting, on a Web site that frequently carried militants’ statements, included a photo of what that statement said was an American soldier, wearing desert fatigues and seated on a concrete floor with his hands tied behind his back. The figure in the photo appeared stiff and expressionless, and the photo’s authenticity could not be confirmed."

Savvy bloggers quickly determined why the abducted soldier looked so stiff. He was an actual 12", 1:6 scale action figure, the gun at his head his own plastic rifle.

Score one for the media jammers. Two years later, the source of the hoax has never been revealed. Disappeared into the abyss of memory with all the other fast-burning sparklers of fear and irony decorating the spectacular mass psychic nightmare of the GWOT, alongside the unsolved anthrax mailings and the tales of the Barney theme being blasted off the walls of improvised shipping containers on the Syrian border, postmodern tool of enemy combatant torture.

The abducted "toy" was Dragon Models' "Special Forces Cody," one of a series of highly detailed real-time poseable action figures for the GWOT produced at headline news speed by postmodern Gepettos in their hidden Hong Kong ateliers. Others included "Tora Bora Ted," "Swift Freedom Delta Force Frank," Covert CIA Agents "Smith and Jones," and Operation Iraqi Freedom gunners "Jackson & Pollack." Retailing at north of $50 per figure, these are not designed for your neighborhood 9-year-old. Rather, they are cryptic simulations that bridge the gap between plasticine adolescent ideas of gear-laden action manhood and mediated CNN reality. 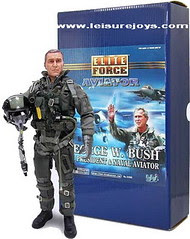 I admit against interest that a few of these once cluttered my desktop as ironic totems and well-armed paperweights. A ready team led by Presidential Aviator George W. Bush, fully outfitted to drop a MOAB from his B-2 — Mission: Accomplished.

The only things missing to complete the realer-than-real simulation on these are some of those secret personal dossier file cards like the ones that accompanied G.I. Joes during the 1980s — character writeups with key characteristics, specialties, skills and a bit of personal backstory, equal parts RPG and Mission:Impossible.

The master modelers need look no further than the compleat strategists over at the Defense Intelligence Agency, where you can download a comprehensive set of "Terrorist Recognition Cards" ready for compilation as the deadliest, most ass-kicking set of bubblegum collectibles ever — as if those WWII aircraft recognition cards that trained you to search the sky for enemy silhouettes had been cross-bred with the horror show of "Mars Attacks." 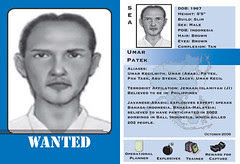 Organized in nifty teams by color-coded regions (red for Afghanistan/Pakistan, green for Iraq, burnt orange for The Horn of Africa, yellow for the Arabian Peninsula, and blue for Southeast Asia), they look to have been put together by some out-of-work members of the Marvel Bullpen, complete with little graphic icons to represent character types: jeweled crown for "Senior Leader," stack of documents for "Operational Planner," gamer soldier for "Tactician," cartoon scimitar for "Operative," loaded forklift for "Facilitator," notepad and pen for "Recruiter," and my personal fave, a little Stratego-style bomb with lit fuse for "Explosives." All you need is a couple of twelve-sided die and you are good to go. I'll trade you two Zakariya Essabars for your Harun Fazul! 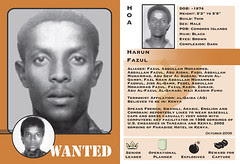 We wait anxiously for DIA to cut a licensing deal with Hasbro for a full line of GWOT action figures.

(In another section of the DIA website, they have the agency's collection of military art -- essentially the covers of unwritten science fiction sequels to Ice Station Zebra, featuring imaginative envisionings of Cold War era Soviet weaponry. That's my kind of Pentagon bureau. I wonder if they have any openings.) 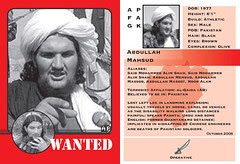 Perhaps the most important icon on the Terrorist Trading Cards is the little stack of black cash: "Reward for Capture." You know, so when you see a likely terrorist taking pictures of your office building or lurking at you nearest mall, you can pull out the recognition card, and, if there's a cash icon, run to the nearest computer, login to rewardsforjustice.net, and file a report to get your own personal war on terror lottery ticket.

What you know could be worth millions!

If you have information about past or future acts of international terrorism, send us a tip now.

You and your family may be eligible for relocation.

Integrate all of this ready-for-play content and you have the mother-of-all killer apps for a 21st century mobile phone-based game of Assassin with a healthy dose of America's Most Wanted.

Don't believe the hype? Check out the slideshow on the hooded Filipino collecting a suitcase full of Ben Franklins from an unnamed US Embassy official who looks like Paul Bartel making his posthumous cameo on 24.

"You and your family may be eligible for relocation." No purchase necessary? Keep an eye on those secretive new neighbors. They may be under relocation, they may have their own trading cards, or maybe the kid just has his own trunkful of next generation toys for a Zeitgeist fueled by the Power of Nightmares.
Posted by Christopher Brown at 2:01 AM