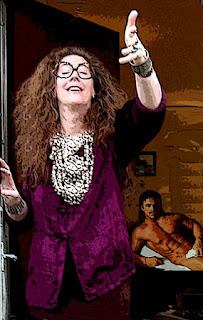 In the game room of level B-3 of the apocalypse-proofed sub-basement at Camp David, the Vice President sat in the warmth of the fire with a tumbler of Glenlivet rocks and admired the newest addition to the trophies hanging on the wall. Between T.R.'s bison head, a D K E fraternity paddle, and a carefully embalmed extraterrestrial biological entity, stretched eight feet of canvas featuring a scene from a geopolitical fever dream.

"Scooter, you've got to come in here and check this out," hollered the Veep to his chief staffer.

Envision this: The Giant White King, an albino sword and sorcery simulacrum of the American President, lies recumbent on the pillowed daybed throne of his private sanctum, framed by a Tolkienesque map of his new empire of the imagination. His imperial pets surround him on the marbled floor, a menagerie of Moreauvian anthromorphs with facial features redolent of barely-remembered newspaper photographs of minor autocrats. Spotted little cat-men, a talking pig, a litter of mangy dog-men, all effusing well-fed supplication.

And stretched across the King's lap is the Leader, re-imagined as a freshly shampooed leonine bodybuilder, bushy tail curled up between his legs, eyes half-closed, whiskers signaling a submissive smile of pleasure. The King strokes the lion-man's belly with one hand; the other holds a leash of silver chain. The King's armory of magical blades is arrayed nearby, ready for use as needed.

"Among other bad career moves."

"I thought he got reassigned."

"Yeah, but he's still on the team. Need to keep a fruitcake like that around for the oddjobs that require that rare postmodern sensibility they don't teach at West Point. Like this."

"Kind of weird stuff, if you ask me," said Scooter.

"I know. But it grows on you. It's supposed to be en route to the Leader's weekend retreat, but I thought the Boss might benefit from having it around for a while. Let the idea sink in a bit, if you know what I mean."

Scooter mixed himself a Tanqueray and tonic, leaned up against the billiard table, and took in the work. In the background, one of Nixon's old Martin Denny records played on the hi-fi at low volume.

"I mean, I'm not much for the science fiction thing," said Scooter, "but he does have a nice brush stroke. And you know, that looks just like…"

"Bingo. You're a little slow today. Take a closer look at the other faces."

Scooter walked up, squinted, and then stepped back.

"I'll be damned," he said. "How about that. Looks like last year's Arab League meeting."

"Yeah. You should have seen it before. The original version was a little too anatomically correct, and we had to have it touched up a bit. Never know when the Attorney General might drop in."

"Which one's the tyrant?" asked Scooter.

"Speaking of tyrants, I'm going to head back up to the War Room and see what's happening," said Scooter.

"Screw that," said the Veep. "Rack 'em up and tap the keg. I can hear Marine One chopping in now. It's party time."

As his cyborg heart thumped in mellow sync with the distant helicopter blades, the Vice President sat back, admired Endora's work, and got to thinking it would look very nice on the wall of his favorite undisclosed secure location.

-- From "Script-Doctoring the Apocalypse," published in The Infinite Matrix (2003).
Posted by Christopher Brown at 6:17 AM