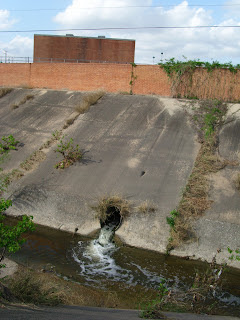 I've seen as many as five turtles at one time, here, where the outflow from a sewage treatment plant spills into a drainage ditch. They weren't itty bitty wildlings or poor little pet turtles trying to make it in the wild. The day I saw five, two of them were at least twelve inches long from nose to tail tip.

They were odd turtles. Flat and pale. The three little ones looked like animated pancakes. The big ones were quick and wary - one glance at me and they dove under the patch of turbulent water and vanished from sight. When I made myself inconspicuous and waited, they resumed their usual activities. One of the big ones buried itself in some sand and debris under the water, from which it stretched a v-e-r-y l-o-n-g neck up to the air.

Given big funny-looking turtles in a smelly drainage ditch in the middle of Houston, amid outflow from a sewage treatment plant, with lurid green algae at the edges of the water, I started wondering if these were mutant turtles. With a bit of research, though, I discovered that they are probably a species called the spiny soft-shell turtle. Descriptions of appearance and behavior perfectly match what I observed.

Nature has plenty of weird wonders, and even wild things that manage to live in the bowels of a big city.