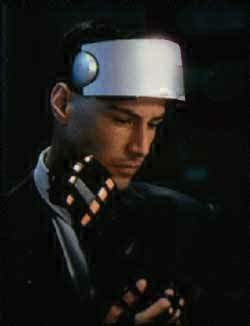 Just what you need to hear in the swirling socio-political doom bath of an imminent presidential election: science is identifying the future pathways to feeding digital media directly into your brain:

Scientific American (Nov. 12 issue): Jacking into the Brain--Is the Brain the Ultimate Computer Interface?
How far can science advance brain-machine interface technology? Will we one day pipe the latest blog entry or NASCAR highlights directly into the human brain as if the organ were an outsize flash drive?

...Primitive means of jacking in already reside inside the skulls of thousands of people. Deaf or profoundly hearing-impaired individuals carry cochlear implants that stimulate the auditory nerve with sounds picked up by a microphone—a device that neuroscientist Michael S. Gaz zaniga of the University of California, Santa Barbara, has characterized as the first successful neuroprosthesis in humans. Arrays of electrodes that serve as artificial retinas are in the laboratory. If they work, they might be tweaked to give humans night vision.

The more ambitious goal of linking Amazon.com directly to the hippocampus, a neural structure involved with forming memories, requires technology that has yet to be invented. The bill of particulars would include ways of establishing reliable connections between neurons and the extracranial world—and a means to translate a digital version of War and Peace into the language that neurons use to communicate with one another. An inkling of how this might be done can be sought by examining leading work on brain-machine interfaces.

Your Brain on Text
Jacking text into the brain requires consideration of whether to insert electrodes directly into tissue, an impediment that might make neural implants impractical for anyone but the disabled. As has been known for nearly a century, the brain’s electrical activity can be detected without cracking bone. What looks like a swimming cap studded with electrodes can transmit signals from a paralyzed patient, thereby enabling typing of letters on a screen or actual surfing of the Web. Niels Birbaumer of the University of Tübingen in Germany, a leading developer of the technology, asserts that trial-and-error stimulation of the cortex using a magnetic signal from outside the skull, along with the electrode cap to record which neurons are activated, might be able to locate the words “see” or “run.” Once mapped, these areas could be fired up again to evoke those memories—at least in theory.

Some neurotechnologists think that if particular words reside in specific spots in the brain (which is debatable), finding those spots would probably require greater precision than is afforded by a wired swim cap. One of the ongoing experiments with invasive implants could possibly lead to the needed fine-level targeting. Philip R. Kennedy of Neural Signals and his colleagues designed a device that records the output of neurons. The hookup lets a stroke victim send a signal, through thought alone, to a computer that interprets it as, say, a vowel, which can then be vocalized by a speech synthesizer, a step toward forming whole words. This type of brain-machine interface might also eventually be used for activating individual neurons.

Still more precise hookups might be furnished by nanoscale fibers, measuring 100 nanometers or less in diameter, which could easily tap into single neurons because of their dimensions and their electrical and mechanical properties. Jun Li of Kansas State University and his colleagues have crafted a brushlike structure in which nano fiber bristles serve as electrodes for stimulating or receiving neural signals. Li foresees it as a way to stimulate neurons to allay Parkinson’s disease or depression, to control a prosthetic arm or even to flex astronauts’ muscles during long spaceflights to prevent the inevitable muscle wasting that occurs in zero gravity.

Learning the Language
Fulfilling the fantasy of inputting a calculus text—or even plugging in Traveler’s French before going on vacation—would require far deeper insight into the brain signals that encode language and other neural representations.

Unraveling the neural code is one of the most imposing challenges in neuroscience—and, to misappropriate Freud, would likely pave a royal road to an understanding of consciousness. Theorists have advanced many differing ideas to explain how the billions of neurons and trillions of synapses that connect them can ping meaningful messages to one another. The oldest is that the code corresponds to the rate of firing of the voltage spikes generated by a neuron.

Whereas the rate code may suffice for some stimuli, it might not be enough for booting a Marcel Proust or a Richard Feynman, supplying a mental screen capture of a madeleine cake or the conceptual abstraction of a textbook of differential equations. More recent work has focused on the precise timing of the intervals between each spike (temporal codes) and the constantly changing patterns of how neurons fire together (population codes).

Some help toward downloading to the brain might come from a decadelong endeavor to build an artificial hippocampus to help people with memory deficits, which may have the corollary benefit of helping researchers gain insights into the coding process. A collaboration between the University of Southern California and Wake Forest University has worked to fashion a replacement body part for this memory-forming brain structure. The hippocampus, seated deep within the brain’s temporal lobe, sustains damage in stroke or Alzheimer’s. An electronic bypass of a damaged hippocampus could restore the ability to create new memories. The project, funded by the National Science Foundation and the Defense Advanced Research Projects Agency, might eventually go further, enhancing normal memory or helping to deduce the particular codes needed for high- level cognition.

The two groups—led by Theodore W. Berger at U.S.C. and Samuel Deadwyler at Wake Forest—are preparing a technical paper showing that an artificial hippocampus took over from the biological organ the task of consolidating a rat’s memory of pressing a lever to receive a drop of water. Normally the hippocampus emits signals that are relayed to cortical areas responsible for storing the long-term memory of an experience. For the experiment, a chemical temporarily incapacitated the hippocampus. When the rat pressed the correct bar, electrical input from sensory and other areas of the cortex were channeled through a microchip, which, the scientists say, dispatched the same signals the hippocampus would have sent. A demonstration that an artificial device mimicked hippocampal output would mark a step toward deducing the underlying code that could be used to create a memory in the motor cortex—and perhaps one day to unravel ciphers for even higher-level behaviors.

If the codes for the sentence “See Spot run”—or perhaps an entire technical manual—could be ascertained, it might, in theory, be possible to input them directly to an electrode array in the hippocampus (or cortical areas), evoking the scene in The Matrix in which instructions for flying a helicopter are downloaded by cell phone. Artificial hippocampus research postulates a scenario only slightly more prosaic. “The kinds of examples [the U.S. Department of Defense] likes to typically use are coded information for flying an F-15,” says Berger.

The seeming simplicity of the model of neural input envisaged by artificial hippocampus-related studies may raise more questions than it answers. Would such an implant overwrite existing memories? Would the code for the sentence “See Spot run” be the same for me as it is for you or, for that matter, a native Kurdish speaker? Would the hippocampal codes merge cleanly with other circuitry that provides the appropriate context, a semantic framework, for the sentence? Would “See Spot run” be misinterpreted as a laundry mishap instead of a trotting dog?

Unfortunately, I think the Drudge Report is already feeding directly into my brain. In anticipation of the upcoming digital conversion, I propose that the only media receiver in my home will be a vintage analog television cabinet, tuned to the nearest translator channel, which will display an ambient bath of that color the sky is turning.