Once you finish being indignant, it's hard not to love the well-crafted political rumors that whisper their way virally through the culture during silly season, sometimes engineered by campaign hacks, other times merely encouraged along the way after appearing in some bizarro populist germination.

The best political rumors, like the best urban legends, speak truth to the collective subconscious -- the primitive fears and tribal affiliations and suspicions of the powerful that lurk beneath the mainstream media narrative. And a quintessential part of the American discourse.

Some of the best I have personally come across over the years:

- George H.W. Bush is gay, and carried on affairs with his tennis boys when he was ambassador to China (attributed to Dole operatives, 1988 campaign).

- Barack Obama is the Manchurian jihadi (current -- see below).


Today's NY Times identifies the source of the "Obama is a Muslim" rumor swirling through the red mobs. Amazing stuff:

The Man Behind the Whispers About Obama

The most persistent falsehood about Senator Barack Obama’s background first hit in 2004 just two weeks after the Democratic convention speech that helped set him on the path to his presidential candidacy: “Obama is a Muslim who has concealed his religion.”

That statement, contained in a press release, spun a complex tale about the ancestry of Mr. Obama, who is Christian.

The press release was picked up by a conservative Web site, FreeRepublic.com, and spread steadily as others elaborated on its claims over the years in e-mail messages, Web sites and books. It continues to drive other false rumors about Mr. Obama’s background.

Just last Friday, a woman told Senator John McCain at a town-hall-style meeting, “I have read about him,” and “he’s an Arab.” Mr. McCain corrected her.

Until this month, the man who is widely credited with starting the cyberwhisper campaign that still dogs Mr. Obama was a secondary character in news reports, with deep explorations of his background largely confined to liberal blogs.

But an appearance in a documentary-style program on the Fox News Channel watched by three million people last week thrust the man, Andy Martin, and his past into the foreground. The program allowed Mr. Martin to assert falsely and without challenge that Mr. Obama had once trained to overthrow the government.

An examination of legal documents and election filings, along with interviews with his acquaintances, revealed Mr. Martin, 62, to be a man with a history of scintillating if not always factual claims. He has left a trail of animosity — some of it provoked by anti-Jewish comments — among political leaders, lawyers and judges in three states over more than 30 years.

He is a law school graduate, but his admission to the Illinois bar was blocked in the 1970s after a psychiatric finding of “moderately severe character defect manifested by well-documented ideation with a paranoid flavor and a grandiose character.”

Though he is not a lawyer, Mr. Martin went on to become a prodigious filer of lawsuits, and he made unsuccessful attempts to win public office for both parties in three states, as well as for president at least twice, in 1988 and 2000. Based in Chicago, he now identifies himself as a writer who focuses on his anti-Obama Web site and press releases.

Mr. Martin, in a series of interviews, did not dispute his influence in Obama rumors.

“Everybody uses my research as a takeoff point,” Mr. Martin said, adding, however, that some take his writings “and exaggerate them to suit their own fantasies.”

As for his background, he said: “I’m a colorful person. There’s always somebody who has a legitimate cause in their mind to be angry with me.”

When questions were raised last week about Mr. Martin’s appearance and claims on “Hannity’s America” on Fox News, the program’s producer said Mr. Martin was clearly expressing his opinion and not necessarily fact.

It was not Mr. Martin’s first turn on national television. The CBS News program “48 Hours” in 1993 devoted an hourlong program to what it called his prolific filing of frivolous lawsuits. He has filed so many lawsuits that a judge barred him from doing so in any federal court without preliminary approval.

He prepared to run as a Democrat for Congress in Connecticut, where paperwork for one of his campaign committees listed as one purpose “to exterminate Jew power.” He ran as a Republican for the Florida State Senate and the United States Senate in Illinois. When running for president in 1999, he aired a television advertisement in New Hampshire that accused George W. Bush of using cocaine.

In the 1990s, Mr. Martin was jailed in a case in Florida involving a physical altercation.

His newfound prominence, and the persistence of his line of political attack — updated regularly on his Web site and through press releases — amazes those from his past. 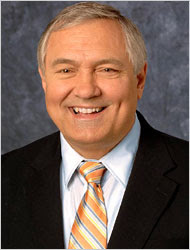 Posted by Christopher Brown at 8:35 AM