Be warned, people! The streets of Austin are not the only places you must be on guard lest shambling undead corpses attempt to devour your brains. Now comes word that not even proper British comedy-of-manners novels are safe havens: 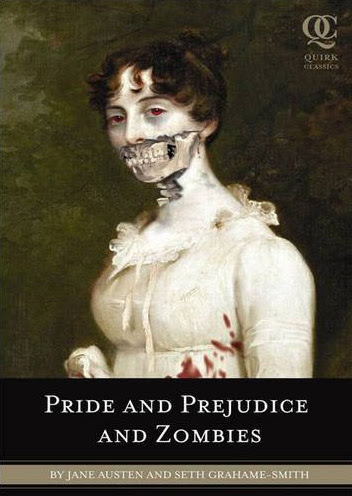 Pride and Prejudice and Zombies features the original text of Jane Austen’s beloved novel with all-new scenes of bone-crunching zombie action. As our story opens, a mysterious plague has fallen upon the quiet English village of Meryton—and the dead are returning to life! Feisty heroine Elizabeth Bennet is determined to wipe out the zombie menace, but she’s soon distracted by the arrival of the haughty and arrogant Mr. Darcy. What ensues is a delightful comedy of manners with plenty of civilized sparring between the two young lovers—and even more violent sparring on the blood-soaked battlefield as Elizabeth wages war against hordes of flesh-eating undead. Complete with 20 illustrations in the style of C. E. Brock (the original illustrator of Pride and Prejudice), this insanely funny expanded edition will introduce Jane Austen’s classic novel to new legions of fans.

Is there any doubt that Austin, a proudly bookish city with such landmark literary institutions as Book People is the city that infected Austen (merely one letter apart--clearly a case of the zombie virus mutating and "making the jump" if ever there were one)? Now that this virulent plague has leapt from the living world to the literary one, where will the horror end? Certainly, some writings will fare better than others. On the genre front, Starship Troopers and Zombies I can't imagine being much different at all, but Flowers for Algernon and Zombies promises to be very painful, indeed. Thank goodness William Hjortsberg's 1971 tour-de-force Gray Matters remains safely out of print. Can you imagine the unending carnage were zombies to gain access to four billion brains in jars?
Posted by Jayme Lynn Blaschke at 12:44 PM

Ya know.. i know of a way to get Zombie Crossing signs that are 100% legal. Check out http://www.zombiemall.com/ind ex.php?act=viewProd&productId=151 for Zombie Crossing Signs!

Now I know what to get the missus for Valentines Day.