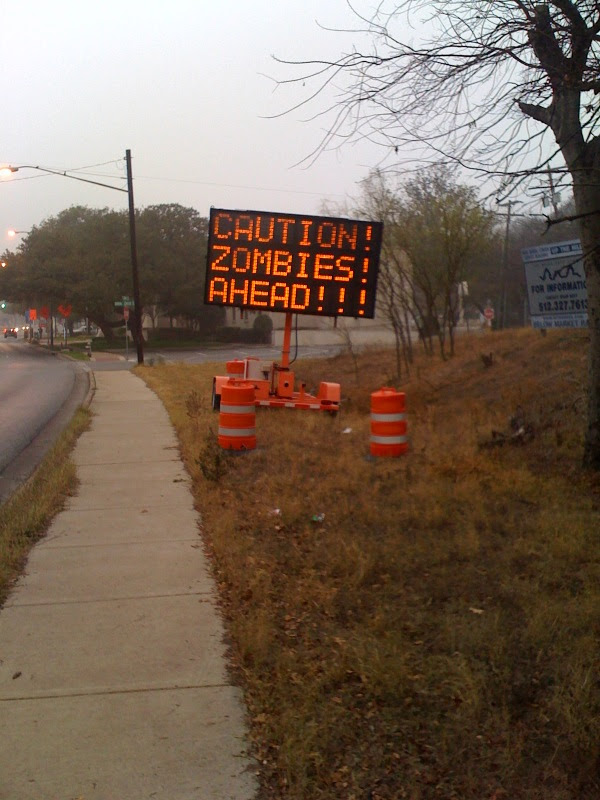 This sign is on a major north-south street, Lamar Boulevard (named after Mirabeau Lamar, the second President of the Republic of Texas and the first Governor of the State of Texas, famous for his failed attempt to annex New Mexico — we haven't given up yet!), near the intersection of Martin Luther King, Jr. Boulevard, where construction has been ongoing for what seems years.

I pointed this out to my son, just as the sign changed: 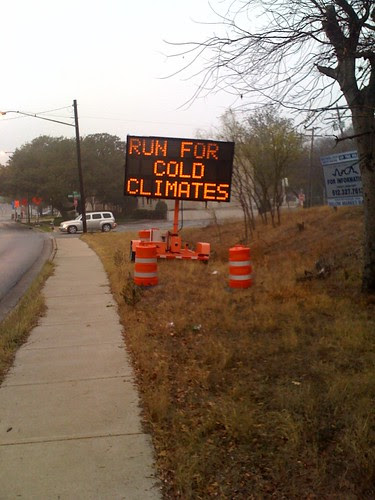 And then it changed again, another 3-5 seconds later: 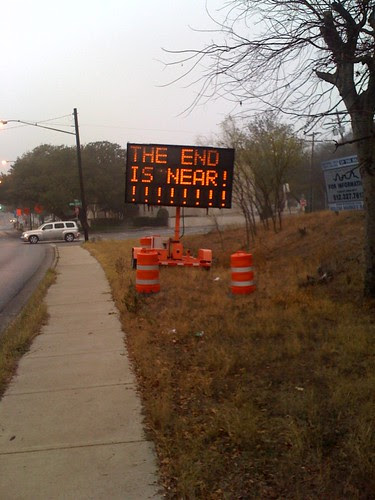 We continued northward (toward colder climates) and speculated, figuring some inventive hackers had developed a new variation on billboard liberation and completed the hack overnight.

Then, after drop-off, returning southbound, I saw another sign: 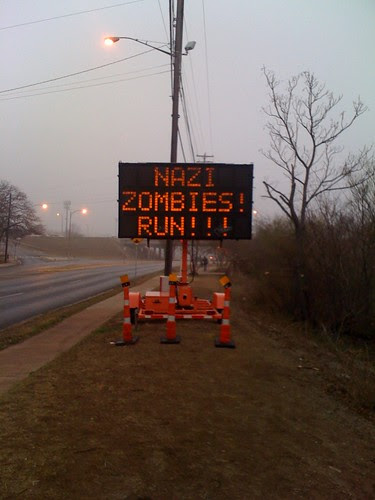 Which caused me to wonder if this is some clever viral product placement by the gang responsible for this new Norwegian Nazi Zombie movie, Dead Snow. I'm happy without knowing, and glad people are doing their dutiful part in the "collaborative fission of coordinated individualism" to Keep Austin Weird.

Though if the construction sign liberators had read their history, they would know that during the Civil War General Custer camped right on the spot where the signs are located, and that if there are zombies in our midst they are more likely wearing Union Blue than Waffen SS Black:

Custer liked the stretch of Shoal Creek that is now Pease Park so much that he established his "bullpens" here, where unreconstructed rebels and other criminals and ne'er-do-wells passed the day and night. When 35 of his men died from a fever, he buried them here. After a flood in the 1880s washed up some of the bodies, they were exhumed and moved to a national cemetery in Washington.

If you don't believe me, drive by and check it out for yourself (before the road crew fixes it): 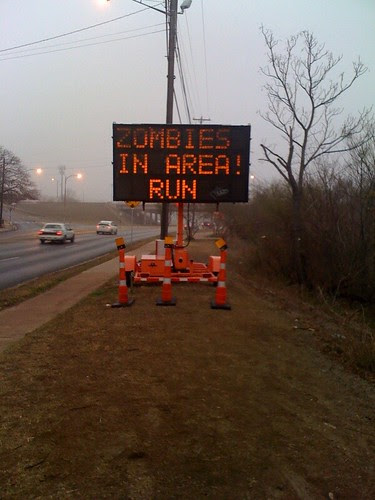 Your site has a terrible tag line, absolutely awful.

I am more than overjoyed to see zombie awareness kept high in Austin, and I think your tagline is just fine. :)

Hide your brains! They're hungry!

As far as the tagline goes, you'll have to blame Blaschke. (Between you and me, I wasn't crazy about the primary name, either.) I try to compensate. Thanks for coming by anyway!

I think the Nazi Zombies are a refernce to a level on Call of Duty: World at War

Not sure how legal it is to mess with these signs, so I'm certainly not going to suggest that you join in the fun.

I would complain to the Texas DOT; "Zombie" is a pejorative term and that they prefer to be called "Re-animated-Americans."

I think "Zombie" is actually used among certain Texans as a code for Californians...

Yeah, seriously, your tagline is a fairly good example of smashing words together and hoping they sound smart/sexy/something. (fail) You can do better!

you fools Nazi Zombies is from a VERY popular video game right now- Call of Duty: World at War.
it has nothing to do with Californians, which im offended by.. being a Californian myself....

This is hysterical! Who cares if it's Call of Duty or Californians. It's funny as hell. They should do this more often with construction signs then maybe there would be less road rage.

Austin's new slogan: Enjoy some live music with the undead.

You need to play cod 5.
you fail in your deductions epicly.
you must now perform sepuku.
Enjoy:D

In trying to keep zombie awareness high, I am interested in discussing how my publisher might acquire permission to use your photo as cover art for an edited collection on the ubiquitous zombie. You would, of course, be thanked, lauded, even simpered over in the acknowledgements for having the forethought to snap such a essential piece of zombienalia, but I assume there are channels to go through... could you direct me to the proper channel? Thanks for even considering this request. Cheers!

dgerlingchristie — Feel free to use any of these photos with credit to Chris Nakashima-Brown/No Fear of the Future. Thanks! — Chris N-B

Typical, fear because you refuse to understand.
www.zombieadvocacy.com

Typical. Fear of something you refuse to understand:
www.zombieadvocacy.com