Eight seconds into the future 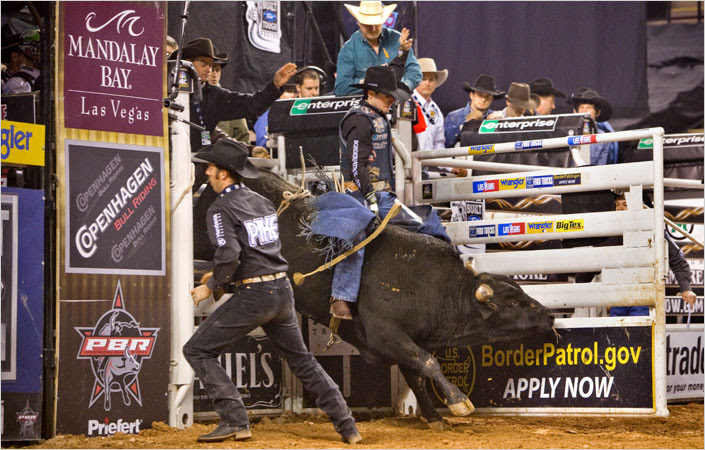 So yesterday I was reading a little article about the life of the professional bull rider. Which seems to involve a lot of aspirin, nasal reconstruction (from when you get "dashboarded" by the bull), Copenhagen, and U.S. Border Patrol endorsements.

I have been interested in bull riding ever since I randomly discovered the shark-jumping reality show Ty Murray's Celebrity Bull Riding Challenge, in which the diminutive Texan champ (assisted by his girlfriend the Alaskan singing poetess, Jewel) teaches a crew of has-been celebrities, including actor Stephen Baldwin, Leif Garrett (who wimps out on the first day), Nitro from American Gladiators, Vanilla Ice, Rocket Ismail, Jonny Fairplay (yes, a reality show star appearing as such on other reality shows — we live in the age of meta-*non*fiction), an ultimate fighting guy, a motocross guy, and the direct-to-video son of Anthony Quinn.

(Yes, you are in luck, all six episodes of this masterpiece are available free online at Country Music Television:)

Having third-tier celebrities (for whom your brain still uses one individual neuron each, no matter how obscure!) makes total sense, since the real stars of the Professional Bull Riding league are the bulls. Maybe because the naming of the bulls is so etymologically inspired, like a burly Nascar variation on race horse names, as in these big boys that have made the list of bulls producing 90+ point rides:

You may recall my mention a couple months back of how Technovelgy and others picked up on the background idea from my story "The Sun Also Explodes," included in Lou Anders' acclaimed anthology Fast Forward 2, of a football league without restrictions on human modification:

Crile scratched his silvery buzzcut, flexing a biceps that pulsed with the texture of manufactured tendons and polymerically enhanced blood vessels. He was one of the alpha generation of real celebrity cyborgs, a Texas star college quarterback who was among the first to go straight to the UFL.

The Ultimate Football League was the first to abandon professional athletics' anachronistic insistence on the prohibition of performance enhancements, be they pharmaceutical, biomechanical, or genetically engineered. It was a genius stroke by the founders. The audience was far more interested in superhuman performances than fidelity to nature, and the athletes were addicted to the potential of even greater power.

In related posts, I have talked about the Freeman Dyson vision of an imminent world where genetic modification technology ends up democratically distributed just like personal computing technology was beginning twenty-five years ago.

So you put all this together, and you quickly end up realizing that a much more likely imminent kind of rogue science-enabled extreme psycho-sport for the 21st century is something like ultimate bull riding, in which the supreme test of post-cowboy manhood is how many seconds you can stay on that genetically modified monster bull. You know, the one that's got all of his innate bullness turned up to 11, a few cyborg enhancements, and some other species strands spliced in, like the rogue fruits in fine wines — a little bit of pit bull, a little bit of bison, maybe a little bit of vintage triceratops? *

Tell me you wouldn't pay to watch that rodeo.

*Special prize: We'll send a free copy of Fast Forward 2 to whoever can come up with the most worthy name for that bull (just add a comment below).
Posted by Christopher Brown at 7:49 AM

One nice thing about bull riding, as opposed to say, calf roping, is that it's very clear that the animal is expected to have the upper hand in the encounter.

My favorite bull is from several years ago, a real twister named Bodacious.

I'd be tempted to name it Trouble, or some variation thereof (i.e. Sounds Like Trouble).

Forgive me the pun.

Maureen, I think we need to round up a crew to catch the rodeo.

I attended my first rodeo (the gargantuan Houston Livestock Show & Rodeo, no less) when I was seven. And many since. During my days spent as a sports reporter, I covered more than I can count and with the advent of the professional bull riding circuit (a distinct rival to the PRCA circuit) things really got crazy.

Let me assure you that of all the sports there are to cover, rodeo is one of the least journalism-friendly ones out there. It's just not easy to tease a narrative out of events where the biggest rivals compete days apart and head off to the next paycheck in Albuquerque or Butte or wherever another rodeo is being held that same week.

And the barrel racers are *always* attached to the bull riders. I've yet to see one slumming with a bronc rider or calf roper.

A bull with triceratops in it should obviously be named Triple Threat.

Thanks for all those awesome suggestions, y'all. I think my favorites are probably Suicide Bomber (revealing my soft spot for War on Terror irony, even though it's now going out of fashion), Irrational Exuberance, Triple Threat, and Taurescence. Probably in that order. But in recognition of the subjectivity of such things, tell you what: I'll send a copy of the book to any of you who send me an email with your snail mail coordinates. Ping me at nakashima_brown (at) yahoo dot com. Thanks!