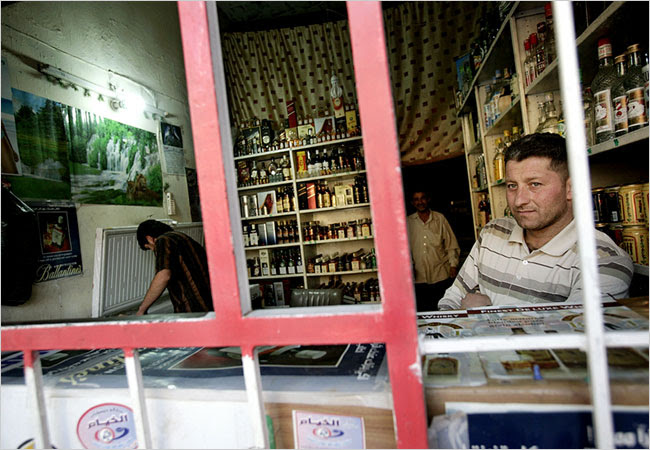 Men gather in cafes to smoke a hookah and gamble on dice and domino games. On weekends, the Mustansiriya Coffee Shop’s back room is crammed with low bleachers set up around a clandestine cockfighting ring. On one recent day, the 100 or so spectators were raucous while watching the bloody spectacle, but they placed their bets discreetly.

Gambling, after all, is illegal.

Walid Brahim, 25, a bomb disposal expert with the Iraqi Army, and his brother Farat, 20, an electrician, recently sat side by side at a table in the Nights of Abu Musa bar, on an alley off Saddoun Street, working their way through a bucket of ice and a bottle of Mr. Chavez Whiskey, an Iraqi-made hooch.

“This is great,” Walid Brahim said. “We used to buy alcohol and just drink secretly in our house.”

The bar is men-only, as pretty much all respectable taverns are, but the brothers look forward to an even brighter future.

“If this security continues,” Farat Brahim said, “within a year all the waiters will be girls.”

The local police, weary of years of dodging assassins and cleaning up after car bombings, are blasé about a little vice.

“Today we are dealing with more normal things. All the world is facing such problems,” said Col. Abdel Jaber Qassim Sadir, assistant police chief in Karada, a central Baghdad neighborhood.

“Prostitution, this kind of behavior cannot be stopped,” Colonel Sadir said. “It’s very hard to find it in public; it goes on in secret, isolated places.”

Actually, not so secret. There are a half-dozen night spots in Karada now where the entry fee is $50. With $150 a week considered a good wage, customers would not pay that much merely for the privilege of drinking.

At the Ahalan Wasahalan Club on Al Nidhal Street one recent night, the owner, Tiba Jamal, was holding court, as she usually does, on the dais at the front of a room with a mostly empty dance floor and lots of tables.

Ms. Jamal calls herself the Sheikha, or a female sheik, an honorific title she has apparently adopted. She dresses in a head-to-toe, skin-tight black chador, and she is adorned with several pounds of solid gold bracelets, pendants, necklaces, earrings and rings, her response to the financial crisis.

The cyborg veep may be gone, but his dream of a Middle Eastern Hooters franchise is on the verge of being realized.

You can read an excerpt from my own vision of Baghdad vice here. 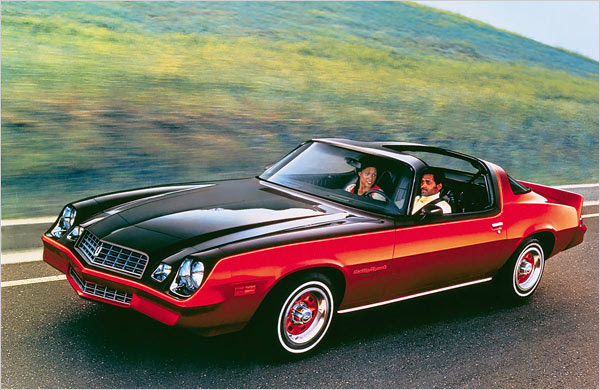 Also in today's paper, on the backside of the sports section, is Lawrence Ulrich's hard-boiled review of the new Camaro:

In Detroit around 1980, my friend Donnie and I borrowed his dad’s hopped-up Camaro from the early 1970s. We were about 17, so you can guess the rest. Donnie lost control and bored straight into a parked car on Gratiot Avenue, but I never looked up because I was biting into a Taco Bell Burrito Supreme. My head flew through the windshield, but aside from some decorative glass in my forehead, I was unscathed.

I stumbled from the car, and a woman on the sidewalk screamed in horror. What she assumed were my leaking brains was in fact the exploded burrito — a primitive air bag? — whose refried shrapnel also covered every part of the car’s interior.

That’s the kind of story you won’t hear from Prius owners.
Posted by Christopher Brown at 8:07 AM