The Return of Dr Zavos

The Independent reports on the latest documentary on Cypriot-Kentuckian physician Panayiotis Zavos, who is busy developing human clones at his secret fertility lab in an unnamed country in the Middle East:

Fertility expert: 'I can clone a human being'
Controversial doctor filmed creating embryos before injecting them into wombs of women wanting cloned babies

"In the future, when we get serious about executing things correctly, this thing will be very easy to do," he said. "If we find out that this technique does not work, I don't intend to step on dead bodies to achieve something because I don't have that kind of ambition. My ambition is to help people."

Dr Zavos also revealed that he has produced cloned embryos of three dead people, including a 10-year-old child called Cady, who died in a car crash. He did so after being asked by grieving relatives if he could create biological clones of their loved ones.

Dr Zavos fused cells taken from these corpses not with human eggs but with eggs taken from cows that had their own genetic material removed. He did this to create a human-animal hybrid "model" that would allow him to study the cloning procedure.

Dr Zavos emphasised that it was never his intention to transfer any of these hybrid embryos into the wombs of women, despite Cady's mother saying she would sanction this if there was any hope of her child's clone being born.

Dr Zavos is collaborating with Karl Illmensee, who has a long track record in cloning experiments dating back to pioneering studies in the early 1980s. They are about to recruit 10 younger couples in need of fertility treatment for the next chapter in his attempts at producing cloned babies.

"I think we know why we did not have a pregnancy," said Dr Zavos. "I think that the circumstances were not as ideal as we'd like them to be. We've done the four couples so far under the kind of limitations that we were working under.

"We think we know why those four transfers didn't take. I think with better subjects – and there are hundreds of people out there who want to do this – if we choose 10 couples, I think we will get some to carry a pregnancy."

The little girl who could 'live' again

Little Cady died aged 10 in a car crash in the US. Her blood cells were frozen and sent to Dr Zavos, who fused them with cow eggs to create cloned human-animal hybrid embryos.

These hybrid embryos were developed in the test tube and used to study the cloning process, but were not transferred into a human womb, despite Cady's mother saying she would sanction this if there was a chance the clone of her little girl could be born. Dr Zavos said he would never transfer hybrid animal clones into the human womb.

However, cells from Cady's "embryo" could in the future be extracted from the frozen hybrid embryo and fused with an empty human egg with its nucleus removed. This double cloning process could produce a human embryo that Dr Zavos said could be transferred into the womb to produce Cady's clone.

Hmm. Recall also the reports a couple of months ago about the increasing enthusiasm among dog breeders for using the frozen sperm of champions to sire show dogs of the future.

We have all experienced, if at the margins, the extent to which the frustrated human instinct for procreation, when married with the most advanced contemporary fertility technologies, produces results against nature.

We know how people love to harvest every opportunity for putative self-expression, pseudo-creativity through consumption that thinly masks our infinite variations of juvenile Narcissistic display.

And we know how feelings for loved ones can drive pretty crazy obsessive strategies.

Beyond the previously discussed opportunities for the superrich to grow their own status display children from the frozen genetic material of dead celebrities, one has to wonder: if the mad doctor has already created embryos resurrecting the life of the dead girl by merging her genetic material with a cow embryo, how long before some well-heeled and slightly deranged parent persuades him to try to bring such a chimera to term in some circumstance where that's the closest they can get to erasing the child's death? In terms of the weird mutations of human psychology, it could totally happen. Envision the strange-looking house pet that is a living homage to the life of a lost child. Mooo. I bet Mom and Dad will let it sleep on their bed. 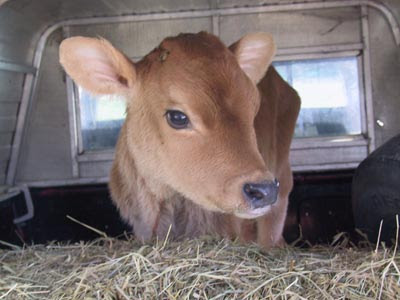 Posted by Christopher Brown at 6:02 AM

I would like to point out that he is NOT a physician.