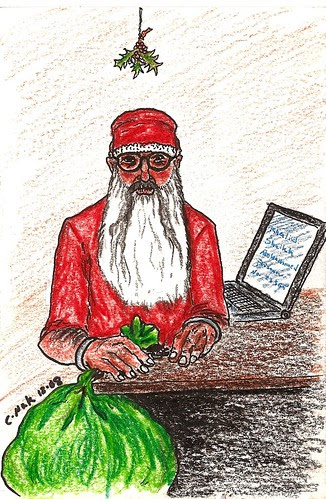 Some of you have received tangible versions of the above Christmas card I drew this year, appropriating the recent courtroom sketches of KSM mounting his own legal strategy in front of the secret tribunals.

As I read some of the latest stories about the birth of Camp X-Ray as a convenient extraterritorial venue for the internment of captured mujahideen, I daydreamed alternate versions of the place, reimagining a twentieth century in which the jurisdictional eccentricities of the place allowed the flowering of a utopian commune that combined the lifestyle experiments of the modernists and their postwar heirs with the sun and rum-soaked romance of twentieth century Cuba. Maybe in a few more years.

Meanwhile, they're hanging mistletoe from the razor wire.

Posted by Christopher Brown at 8:36 AM

Definitely the hottest gunrunner south of the border! Or, as is quite likely, north. After all, who's her competition for the title, Victor Bout?