On the Queen's Service 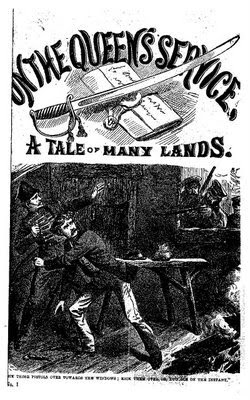 Sleazy French secret agents! Ambushes in the Alps! Russian spies who are “the head and motive power of all the spies that are spread over the continent of Europe.” Intrigue in Istanbul! Sabre to sabre combat with Cossacks in Sebastopol! Hand to hand combat with a Circassian ape! Cannibal femmes fatale! Noah's Ark! Fanatical Muslim hordes!

With all due respect to the Broccolis, this is how you do a story about a British spy abroad, fighting the enemies of the Crown.

Over at On The Queen's Service, I'm serializing an 1875 penny blood which has all of the preceding things, and more. Come join the fun!
Posted by Jess Nevins at 3:45 PM