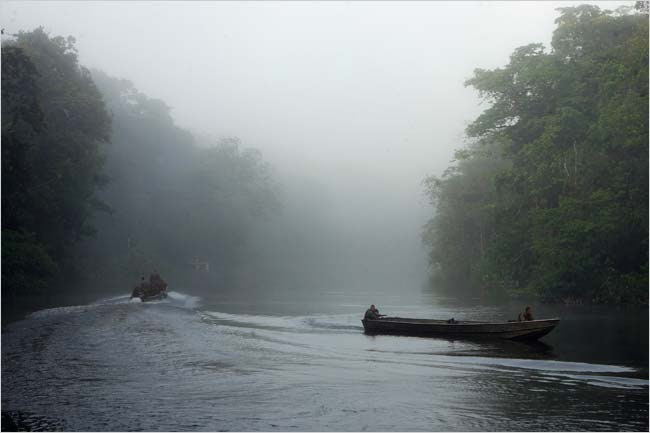 Monday's paper has a wonderful slow news day feature about the contemporary French Foreign Legion, based on a visit to their jungle warfare camp in French Guiana. If you are looking for enticing near-future scenarios, this one has you covered: A mercenary fighting force of young men from all over the planet, with American college boys doing their extreme Hemingway tour taking orders from ex-Spetznaz guys side by side with Arabs and South Americans. With its own French winery. Drinking Red Bull cocktails, guarding the European space launch facility from terrorists (or Maroons, the jungle-dwelling descendants of African slaves) that might emerge form the jungle. Nearby, just off-shore, the ruins of the Devil's Island prison of Papillon fame (remember the Chateau d'If?), which would make a hell of a near-future post-Gitmo, don't you think?

Formed in the 19th century as a way for France to enforce its colonial empire with foreign adventurers, the legion has survived countless challenges, including the French loss of the legion’s North African birthplace, Algeria.

But in this sparsely populated overseas French department, a former penal colony wedged between Suriname and Brazil, it has acquired a postcolonial mission protecting the Guiana Space Center in Kourou, some 110 miles to the northwest, which each year launches into orbit about half of the world’s commercial satellite payloads.

As temperatures soar to 90 degrees in the shade of transplanted baobab trees, legionnaires patrol Kourou, a quiet town of 20,000, their shaved heads shielded from the sun under white pillbox-style hats known as képis blancs.

They guard the four-decade-old space complex from terrorists who could emerge from the surrounding jungle. (There is always a first time.)

On launch days, legionnaires swap their képis for green berets and man artillery stations on roads down which rolls the odd Peugeot or Renault. 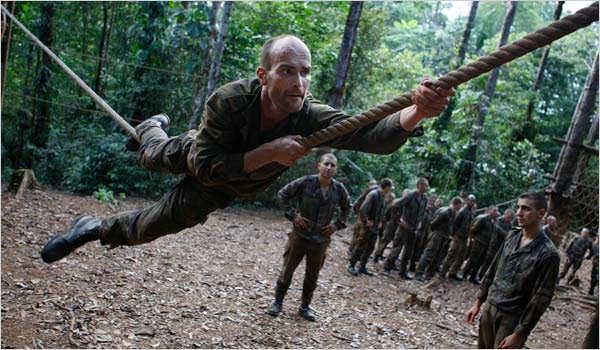 One of the most action-packed scenes in Kourou can be glimpsed nightly at the Bar des Sports on the Avenue des Frères Kennedy. Legionnaires with aiguillettes, or braids, dangling from their starched uniforms pack bar stools next to scantily clad women from Brazilian cities like Macapá and Belém.

At this locale on a recent Friday evening, the legion seemed to have kept its rough edges. Instead of the wine preferred by their officers, legionnaires downed whiskey mixed with an energy drink called Long Horn. A band belted out forró, music from northeastern Brazil. Couples swarmed the dance floor.

“This is where we come to forget why we’re stationed here,” said Andrey Korivitsky, 28, a legionnaire from Belarus who resembles Timothy McVeigh, the Oklahoma City bomber.

The boredom legionnaires complain about in Kourou contrasts with the scene back at Camp Szuts, where the barracks are named for distant battles of decades past, like Vauxaillon and Stuttgart.

Instructors at the camp operate one of the most grueling courses in jungle warfare and survival, opening it to Special Forces from around the world, like the Navy Seals. But its main purpose is preparing legionnaires for hardships in places where France still uses them for military intervention, like Chad, Djibouti or Ivory Coast.

“We are the grunts who are supposed to suffer, like your marines, at the hands of sadists,” said Sgt. Ivan Grezdo, 33, a Slovakian forced to exit the course after cracking two ribs.

The course offers a window into the culture of the legion, long dominated by Germans who flooded its ranks after World War II. Now, enlistees from former Soviet bloc countries constitute most of the legion’s 7,700 men (no women can join), with the number of Latin Americans, particularly Colombians and Brazilians, rising fast. Officers say Interpol background checks weed out most undesirables. Americans account for only about 1 percent of legionnaires.

“Americans in the legion tend to be the Beau Geste types, the idealists, making them easy pickings for the bullies and malcontents,” said Jaime Salazar, 34, a man from Indiana who joined the legion, deserted, then recounted it all in a book, “Legion of the Lost.”

Indeed, the Americans in the legion seem a bit less hard-boiled than other enlistees. “Pick an area on the map where there’s been a recent crisis, and that area will be a good source of legionnaires,” said Cpl. Buys Francois, 43, a South African who joined 11 years ago.

At 11:45 a.m. on a recent Monday, Corporal Francois and a handful of other grisly legion elders from Hungary, Poland and China could be found on break at the camp’s dimly lighted canteen, sipping Kronenbourg beers. Most agreed it was worth sticking it out for 15 years, when they are eligible for French pensions.

“We call the new entrants Generation PlayStation because they’re so soft,” said Corporal Francois, who claimed he joined the legion after seeing action in South Africa’s army.

“Now we’re taking the ex-husbands running from alimony,” he chaffed, “and all these guys with university degrees.”

Also Monday: A Czech puppet show about the prison life of Julius and Ethel Rosenberg. 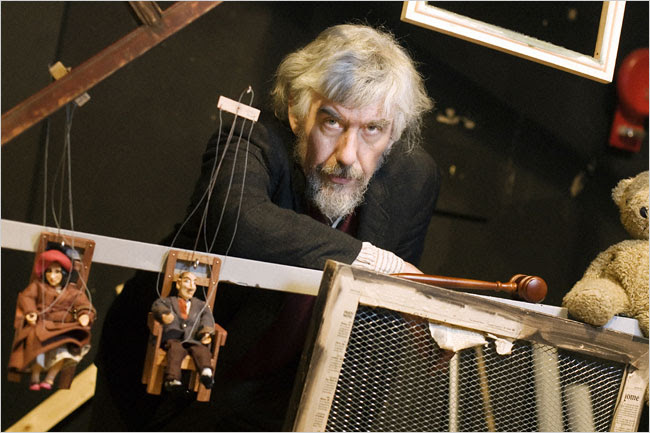 Posted by Christopher Brown at 6:17 AM

Nobody does puppet shows better than the Czechs.