In the spirit of giving to others, and being tight on funds to buy gifts for friends and family, a few topical nuggets on capitalism, crime, and revolution.

1. At the Literary Review, Simon Montefiore reviews Sean McMeekin's History's Greatest Heist: The Looting of Russia by the Bolsheviks:

It begins comically with the inept attempts of the new Bolshevik masters to force Russia's worldly and cosmopolitan bankers to hand over their banks along with the contents of their safes. McMeekin introduces characters like Max Laserson, a top banker and industrialist who threw in his lot with the Reds as a financial expert. But the real anti-hero of the book is a Swedish banker named Olaf Aschberg, who, though a successful banker and arms-dealer during the First World War, was also vaguely sympathetic to the Bolsheviks. This complex and highly intelligent man was to do more to fund the Bolshevik revolution than any other individual, and McMeekin's book does a great service in unveiling his interesting personality.

Next the Bolsheviks managed to seize the tsarist gold bullion - Europe's largest strategic gold reserve, worth $680 million. Meanwhile Lenin ordered the setting up of an organisation - the Gokhran, or State Treasury for the Storage of Valuables - to plunder and collect the private treasures and wealth of the rich nobility. (He himself borrowed the two Rolls-Royces and Delaunay-Belville limousine from the Tsar's garage, though amusingly the latter was actually stolen from him at gunpoint in 1918.) Part of the looting involved the murder of the entire Romanov imperial family: Yurovsky, the organiser of the killings, estimated that the jewellery secured by this slaughter was worth $300,000. The next stage was the nationalisation of all church property. Within weeks, the misguided writer Maxim Gorky, who was a member of the Gokhran, had helped fill countless warehouses with artwork, jewels, cutlery, silver, gold, furniture, books and other artefacts for sale abroad. The members of the committee posed with their swag in heaps - the warehouses sound like giant bandit's treasure troves. By December 1921, the swag was worth $450 million, or $45 billion in today's money.

Yet the Bolsheviks were desperate for guns and food to maintain their new state: all these treasures had to be sold abroad, but secretly, because the foreign capitalists of Britain, America and Western Europe were determined to crush the regime. The Leninist underground swung into action: Aschberg was the leading middleman, but an important figure on the Russian side was Leonid Krasin, a dapper People's Commissar who had managed Lenin and Stalin's campaign of heists and bombings between 1904 and 1907. He was one of those rare characters, a highly cultured and educated bourgeois who was as at home building a new bomb as he was negotiating with hauts banquiers in plush Western hotels. Krasin was assisted by one of the leading launderers of Stalin's bank robberies, Max Wallach, who would become famed as Soviet foreign commissar Litvinov. The foreign trade commissar Anastas Mikoyan was also a key figure. He became one of Stalin's senior magnates and survived at the top of the Soviet hierarchy; he both carried Lenin's coffin and attended JFK's funeral.

Soon Bolshevik operatives, some of them trusted veterans and others shadowy wheeler-dealers, brought back hundreds of millions in cash in suitcases. The climax of the book comes when the Bolsheviks and Ashberg set up a huge gold and treasure sale in Reval (Tallinn), a Baltic city that rapidly assumed 'a wild west atmosphere, becoming a kind of Bolshevik boomtown'. The Hotel Petersburg was the Bolshevik headquarters, where a crew of Leninist ruffians and smooth operatives, Western adventurers and conmen, and the representatives of respectable American, French and British investment banks, bought the treasures of Russia. De Beers purchased £1 million worth of diamonds for £365,000 under Litvinov's negotiations, but he did better later when he sold jewels worth $10 million to an English buyer. In less than two years, Lenin had raised, through gold sales, $353 million (£35 billion in today's money).

2. At Wikipedia, the real Ponzi, who, of interest to any writer who has ever submitted a story to an overseas market with SASE, invented an elaborate money-laundering scheme involving postal International Reply Coupons. 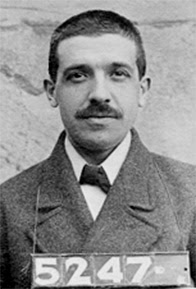 A few weeks [after his release from prison for alien smuggling] Ponzi received a letter in the mail from a company in Spain asking about the catalog. Inside the envelope was an international postal reply coupon (IRC), something which he had never seen before. He asked about it and found a weakness in the system which would, in theory, allow him to make money.

The purpose of the postal reply coupon was to allow someone in one country to send it to a correspondent in another country, who could use it to pay the postage of a reply. IRCs were priced at the cost of postage in the country of purchase, but could be exchanged for stamps to cover the cost of postage in the country where redeemed; if these values were different, there was a potential profit. Inflation after the First World War had much decreased the cost of postage in Italy expressed in U.S. dollars, so that an IRC could be bought cheaply in Italy and exchanged for U.S. stamps to a higher value. The process was: send money abroad; have IRCs purchased by agents; send the IRCs to the U.S.A.; redeem the IRCs for stamps to a higher value; sell the stamps. Ponzi claimed that the net profit on these transactions, after expenses and exchange rates, was in excess of 400%.

Ponzi canvassed friends and associates to back his scheme, offering a 50% return on investment in 45 days. The great returns available from postal reply coupons, he explained to them, made such incredible profits easy. He started his own company, the Securities Exchange Company, to promote the scheme.

Some people invested, and were paid off as promised. The word spread, and investment came in at an ever-increasing rate. Ponzi hired agents and paid them generous commissions for every dollar they brought in. By February 1920, Ponzi's total take was US$5,000, (approximately US$54,000 in 2008 dollars).

By March he had made $30,000 ($328,000 in 2008 terms). A frenzy was building, and Ponzi began to hire agents to take in money from all over New England and New Jersey. At that time investors were being paid impressive rates, encouraging yet others to invest.

By May 1920 he had made $420,000 ($4.59 Million in 2008 terms). He began depositing the money in the Hanover Trust Bank of Boston (a small Italian American bank on Hanover Street in the mostly Italian North End), in the hope that once his account was large enough he could impose his will on the bank or even be made its president; he did, in fact, buy a controlling interest in the bank. One biographer of Ponzi who wrote eighty years later described the cash price at which the bank's founding family sold their stake as suspiciously high. Having had a fiduciary duty to protect their depositors they were a lasting unindicted beneficiary without direct involvement.[citation needed]

By July 1920 he had made millions. People were mortgaging their homes and investing their life savings. Most did not take their profits, but reinvested.

Ponzi was bringing in cash at a fantastic rate, but the simplest financial analysis would have shown that the operation was running at a large loss. As long as money kept flowing in, existing investors could be paid with the new money, but colossal liabilities were accumulating.

Ponzi lived luxuriously: he bought a mansion in Lexington, Massachusetts with air conditioning and a heated swimming pool, and brought his mother from Italy in a first-class stateroom on an ocean liner. He was a hero among the Italian community, and was cheered wherever he went.


3. At the SEC, excerpts from the official complaint against Bernard Madoff:

16. Madoff ran his investment adviser business from a separate floor in the New York offices of BMIS.

17. Madoff kept the financial statements for the firm under lock and key, and was "cryptic" about the firm's investment advisory business when discussing the business with other employees of BMIS.

18. In or about the first week of December 2008, Madoff told a senior employee that there had been requests fiom clients for approximately $7 billion in redemptions, that he was struggling to obtain the liquidity necessary to meet those obligations, but that he thought that he would be able to do so. According to this senior employee, he had previously understood that the investment advisory business had assets under management on the order of between approximately $8-15 billion.

19. On or about December 9, 2008, Madoff informed another senior employee that he wanted to pay 2008 bonuses to employees of the firm in December, which was earlier than employee bonuses are usually paid.

20. Bonuses traditionally have been paid at BMIS in February of each year for the previous year's work.

22. At that time, Madoff informed the senior employees that he had recently made profits through business operations, and that now was a good time to distribute it. When the senior employee challenged his explanation, Madoff said that he did not want to talk to them at the office, and arranged a meeting at Madoff's apartment in Manhattan. At that meeting Madoff stated, in substance, that he "wasn't sure he would be able to hold it together" if they continued to discuss the issue at the office.

23. At Madoff's Manhattan apartment, Madoff informed the two senior employees, in substance, that his investment advisory business was a fraud. Madoff stated that he was "finished," that he had "absoIutely nothing," that "it's all just one big lie," and that it was "basically, a giant Ponzi scheme." In substance, Madoff communicated to the senior employees that he had for years been paying returns to certain investors out of the principal received from other, different, investors. Madoff stated that the business was insolvent, and that it had been for years. Madoff also stated that he estimated the losses from this fraud to be approximately $50 billion. One of the senior employees has a personal account at BMIS in which several million had been invested under the management of Madoff.

24. At Madoff's Manhattan apartment, Madoff further informed the two senior employees referenced above that, in approximately one week, he planned to surrender to authorities, but before he did that, he had approximately $200-300 million left, and he planned to use that money to make payments to certain selected employees, family, and fiiends.


As I take in all of these inputs, I can't help but imagine near-future science-fictional postulates. As the entire edifice of contemporary finance in the United States unravels, revealed as essentially one giant fictive Ponzi scheme, who is going to loot the ruins? Would the Sprawl from Wall Street to Foggy Bottom degenerate into one giant looting spree somewhere between Katrina and Mogadishu?
Posted by Christopher Brown at 8:18 AM

When is an economy "too big to fail?"