First, I have to offer an apology to anyone expecting chapter 30 of Memory this week. I'm afraid that's not going to happen. Instead, I offer as a gift to you, loyal readers of No Fear of the Future, a wholly original and self-contained piece of short fiction, written by yours truly for you in the spirit of the season. I hope you enjoy it, and if you don't, well, you get what you pay for. Merry Christmas! 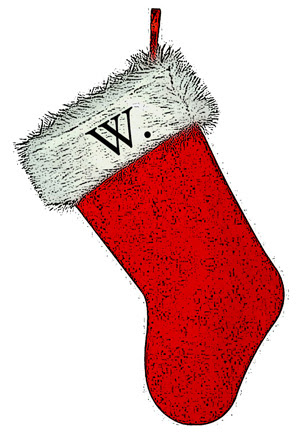 Subdued, yet persistent alarms sounded throughout the Aspen Lodge. Determined Secret Service agents strode down the main hall, checking each door in turn as their personal Bluetooth ear clips fed them a steady stream of threat updates.

An agent entered the study, and found the President with his cowboy boots kicked up on the desk, reading The Washington Times’ sport section.

“Oh, it’s you, Shade Man,” the President said, looking back to his paper. “Can you believe this? Teixeira’s getting $180 million from the Yankees. I mean, come on. We didn’t even pay Nolan Ryan that kind of money when I owned the Rangers, and he at least had a great nickname.”

“Mr. President, the bogey’s evaded our interceptors and crossed over the Canadian border,” the agent said. “You need to get to a secure location.”

“His nickname was ‘The Ryan Express,’ you know.”

“That’s from the movie ‘Von Ryan’s Express.’ It’s got like two meanings, see? That’s what makes it so great.”

“Sir, we’ve already moved the Vice President to an undisclosed location, but the longer you remain here, the more vulnerable you become.”

“Is that so?” The President eyeballed the agent over the top of his paper. “And where you boys got Big Time stashed this time?”

“I’m afraid I can’t tell you, Sir.” The agent shifted uncomfortably. “It wouldn’t be undisclosed then.”

“Point taken,” the President nodded, then folded his paper. “Shade Man, Camp David is the most secure campground in the world. We’ve got Seabees and Marines all over the place here. Why, KOA’s got nothing that can compare.”

“He won’t budge,” the first answered.

“Mr. President, the threat is more grave than you understand. We have to evacuate you.”

“I am not running from a fat man in a red suit,” the President said. “You forget that my cat-like reflexes saved me from that Iraqi assassin’s attempt on my life last week. So, if that Santa fella thinks he’s got the moxie, I say ‘Bring it on!’”

“Mr. President, that was a shoe-throwing journalist.”

“They were wing-tips, goddamnit!”

The door flew open, and the Chief of Staff rushed in.

“Hey Shoe Man,” the President said in surprise, “I thought you were spending Christmas in Washington--although it is ironical you’re here, seeing as how we’re just discussing Iraqi assassins.”

“Mr. President, I boarded a plane as soon as I learned of the threat against you. And I have to say, I find it wholly credible,” the Chief of Staff said. “Placing the leader of the free world on the ‘Naughty’ list is no different than an Ayatollah issuing a Fatwa against you. I’m sure all international legal scholars would agree.”

“So Santa Claus is working with Al-Quaeda now? Sonofabitch. I sat on his lap once when I was a kid.” The President thought for a moment. “I thought we had him and his radical backers stonewalled in the U.N.?”

“We did, until Al Gore met with him and convinced Santa the entire permanent ice cap would melt before we allowed any binding CO2 emission controls to come up for a vote,” the Chief of Staff said. “Santa... overreacted. He believes we’ve not been negotiating in good faith.”

“I knew both of those names starting with ‘Al’ couldn’t be a coincidence. I think Mr. Gore needs to check in for an extended stay at Hotel Guantanamo,” the President shot back. “Where’s the proof that Global Warming is real?”

“Well, the Kringlehaus--Santa’s largest and oldest toy assembly plant--fell into the Arctic Sea earlier this summer when the pack ice melted. Nearly 1,500 elves drowned, and another 37,000 were put out of work.”

“Damnit, didn’t we have a deal worked out to relocate his factories to the Christmas Mountains in west Texas? What the hell ever happened with that?”

“Sonofabitch!” The President flung his paper across the study. “This kind of shit never happened when Turd Blossom was here.”

The first agent put his hand to his ear. “We’re getting reports of elves stuffing sugar plums and marzipan into the gas tanks of SUVs across the country,” he said. “It’s really getting ugly.”

The lights went out, except for the multicolored string blinking around the window.

“How the hell can he be here already? You told me he just crossed the border not five minutes ago,” the President whispered back. “I’ve run whitetails down in my pickup back in Crawford. They don’t run more than 20 miles an hour or so. You can’t tell me these reindeer can fly any faster.”

A faint echo of jingle bells drifted through the house.

“He’s definitely here,” the first agent confirmed, drawing his gun from his jacket.

“Whoa, hold on there,” the President said, placing his hand over the gun and forcing it back. “No guns. We don’t want to be waking up Mom and 41. Or the twins. Or Laura. I’d never hear the end of it I let one of you shoot Santa. Even if he is an Al-Goreda sympathizer.” He stood up, rolled his neck and thrust his shoulders back. “No sir, I’m ending it here and now. Mano-a-mano. Let’s see that Tiger Woods guy cowboy up like this.”

The agents followed the President into the hall, with the Chief of Staff bringing up the rear. “Where are we going?” he asked.

“The living room, Shoe Man,” the President replied. “That’s where the stockings are hung by the chimney with care.”

They crept into the living room, the lights from the Christmas tree casting a kaleidoscope of colors across the walls.

“Is he here?” the President whispered.

“I don’t think so,” answered the Chief of Staff. “He’s always gone before you look.”

“Yeah. They’ll never live this down,” the second agreed.

“Look here. There’s a note on your stocking.” The Chief of Staff plucked the card away and opened it. “It says, ‘A gift from the reindeer.’ What do you think that means?”

“Oh, for the love of...” The President grabbed his stocking off the mantle.

The agents tried to take it from him. “Whoa, Sir! I don’t think you should--”

“A fat Al-Goreda sympathizer is not going to make me afraid of my own Christmas stocking.” The President held it upside down defiantly. Several black lumps fell to the floor with a solid thunk. “See there? That Santa ain’t as smart as he thinks he is.” A smirk crept across his face. “After all that bemoanification about Global Warming, what does he do? Gives me lumps of coal. Why, I’ll burn these with pride.”

The first agent bent down to examine the lumps. “Sir,” he said, taking a cautious sniff. “That’s not coal...”

Posted by Jayme Lynn Blaschke at 3:37 AM

Brilliant, Jayme! No better gift for me today than a really well-done alternate W. Merry Christmas to you and your beautiful family.