A CLOCKWORK MAN THAT TALKS AND SINGS
H. Whitman, a Berlin inventor, has, after many years, succeeded in making a mechanical man that can walk, and make other human movements, and can speak, sing, whistle and laugh. This mechanical masterpiece is so human that at a distance of a yard it cannot be told from a living being.

The figure is a mass of intricate cogs and machinery. In the chest a number of phonographs are arranged, but how the machinery is controlled is a secret of the inventor. It has been said that wireless electric waves are at the bottom of the mechanical miracle. Each part of the figure is controlled by a little electric motor.

The inventor carries about with him a disk upon which is a little needle. This is attached to an electric coil of his own invention, which is in harmony with the little motors inside the figure. By moving the needle from one point to another, he starts by wireless waves the parts that he wants to move. And the principle is owrked out in endless combinations. 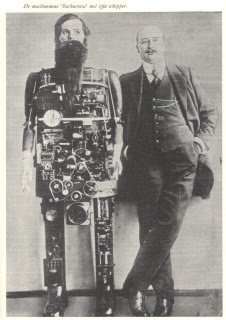 "The Coming Race," and at a latter date H. G. Wells's conception of the same solution of the servant problem.

Writers of fiction, in all countries and ages, have found inspiration in the idea of duplicating the complicated works of nature with mechanical constructions. To describe such imaginary mechanisms is much easier than actually to construct them.

Clockmakers, owing to their familiarity with the means of producing all sorts of movements in the transmission of power, have always been the most ingenious artificers on these lines--but they have usually constructed their moving human figures with the main purpose of their contrivances--to tell the time of day and the progress of the seasons.

To construct a mechanical man is merely to triumph over mechanical difficulties--the man being of no use, but merely a curiosity when created--which appears to be the case with Mr. Whitman.

I found this article, with the (admittedly murky) picture on the left, back in June, during my hiatus. While looking for some accompanying information on this "H. Whitman," I found the Cybernetic Zoo (a site I hadn't known about) and its page on this robot, which was apparently named "Occultus" or "Barbarossa." I took the (much clearer) photo on the right, from that page, and I trust the owner(s) of the Cybernetic Zoo will forgive me borrowing the image from their site.