One of the best examples of this is the following, which is entirely true. I haven't made up a single word of it.

Walburga “Dolly” Oesterreich (1880-1961) made, shall we say, a mistake in marrying Fred Oesterreich. Fred, a textile manufacturer, was certainly wealthy, and life with him was a big step up from Dolly’s hardscrabble existence growing up in rural Wisconsin. Fred’s mansion in Milwaukee was one of the biggest in the city—textile manufacturing was a profitable business in 1913—and Dolly’s life with Fred was posh.

But Fred, well, he liked to drink. A lot. Liked to hang out with the boys at night. Liked to hunt. And he liked to drink. And Dolly, well, she was always a bit sensitive about her looks, and easily wounded by the charges of being a gold-digger, and she wanted affection from Fred, and he didn’t seem to have provided her with much or made her feel better about herself.

Also, she liked sex. Lots and lots and lots of sex. And Fred, he hung out with the boys at the bar, and drank a lot, and either underperformed with Dolly or just didn’t perform at all.

So in 1913, when Dolly met a cute 17-year-old, Otto Sanhuber, who actually paid some attention to her, and made her feel attractive, it was understandable and perhaps even inevitable that she'd make a run at him. Otto worked as a sewing machine repairman at Fred's factory, so one day Dolly told Fred that her sewing machine needed repairing. Fred sent Otto to the house. Dolly met him at the door wearing stockings, a silk robe, and nothing else. The two would take up together--more explicitly, they went at it like crazed weasels, for eight to ten hour stretches.

At first they trysted at Otto's room in a boarding house or at a nearby hotel, but soon enough they began using the marital bed at the Oesterreichs’ home. Initially Dolly allayed the neighbors’ suspicions by telling them that Otto was her “vagabond half-brother,” but Otto was around so often that Dolly’s excuse wore thin after a couple of weeks.

So Dolly took the next logical step—and this is where the story of Dolly and Fred goes from being just another sad marital affair to being entertainingly pulpy and absolutely true.

Dolly told Otto to quit his job and move in with her. The Oesterreichs’ home had a large attic, and Fred never went up there. Otto would be close to Dolly, they wouldn’t have to sneak around for their hook-ups, and he could (while not romping with Dolly) write the pulp stories he loved—his dream was to write for the pulps.

That was in 1913. In 1918, Otto was still living in the attic, still spending four to eight hours a day having sex with Dolly, and still unknown to Fred, who had come close to visiting the attic in the past five years but never quite managed it.

In 1918 Fred wanted to move to Los Angeles to broaden his business. Dolly didn’t want her idyll to be interrupted, so she snuck Otto out of the house and sent him to Los Angeles to wait for her. She persuaded Fred that what she really wanted was a house with an attic, and Fred fell for it, so once the Oesterreichs were moved in to the new house Dolly snuck Otto into the house and got him settled into the attic, and then resumed her carnal sport with him.

Dolly slowly grew dissatisfied with her marriage and began fighting with Fred. It wasn’t until 1922— 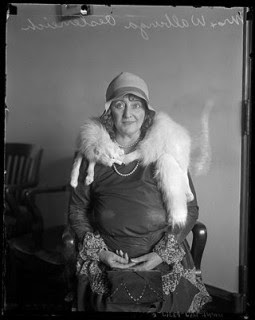 --that the fights became bad enough for Otto to worry—he could hear everything from the attic. On August 22, during one fight, Otto began to fear for Dolly’s safety, and he ran down from the attic, a gun in each hand. He shot Fred three times, killing him.

There’s no particular evidence that what happened next was pre-meditated, but it would surprise no one if Dolly and/or Otto hadn’t fantasized about what they would do if one of them murdered Fred.

They rigged the murder scene to look like a burglary gone wrong. Otto took Fred’s diamond watch, and Dolly went into a closet, which Otto locked from the outside. Otto snuck back to the attic, and Dolly started screaming. The neighbors had called the police when Otto shot Fred, but by the time the police arrived Otto was snug in his attic apartment and Dolly was locked into the closet.

The police had no idea that there was anyone living in the attic. Dolly had a coherent story to tell, and the closet she was in was locked from the outside, so obviously she couldn’t have done it. So the police filed the report as a botched burglary turned murderous, and Dolly inherited Fred’s millions.

The perfect murder? Not really. The police didn’t have enough to arrest Dolly, not then, but they were suspicious of her—Otto had shot Fred with .25 caliber revolvers, which were not the usual weapons of house-robbers.

Dolly sold the house and moved into another one in the neighborhood, again installing Otto in her attic. Dolly meanwhile took up with her attorney, Herman Shapiro. And here Dolly made her first mistake: she gave Herman Fred’s diamond watch, the one supposedly taken during the robbery. Herman recognized the watch, but Dolly said she’d found it under a seat cushion in the house and didn’t think she needed to tell anyone about it. Herman, perhaps not wanting to spoil his relationship with a rich widow, said nothing, but then Dolly asked her third lover, a businessman named Roy Klumb, to dispose of a .25 caliber revolver. Klumb did so (in the La Brea Tar Pits), and when Dolly asked a neighbor to dispose of another .25, he buried it under some rose bushes.

But by July, 1923, the police had learned that Herman had the watch, and Roy, after breaking up with Dolly, told the police about how he’d tossed one of her guns into the tar pits. The police got the gun out of the tar pits and began talking to the papers about the still-unsolved murder of Fred. This prompted the neighbor who’d buried the gun to dig it out and give it to the police. That was enough for the police, so they arrested Dolly. 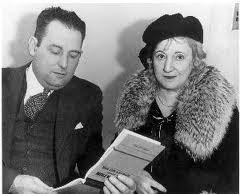 But! Means, motive, and opportunity. Dolly only had the first. How did she murder her husband while locked in a closet? And why would she do such a thing? The police never did figure either of those out, and so, after months of hearings, Dolly left jail a free woman.

During the hearings Dolly had told Herman about Otto (her “vagabond half-brother,” remember) and had Herman bring Otto some food. The two began talking, and Otto told Herman most of the story. For some reason Herman didn’t make the logical leap that Otto had killed Fred, but Herman didn’t want competition for Dolly’s affections, and threw Otto out of the house.

Dolly and Herman moved in together. But their relationship was never particularly smooth, and in 1930 Herman moved out. As soon as he did, he told the police about Otto, who had moved to Canada after being tossed out of the house but had recently returned to Los Angeles. The police arrested both Dolly and Otto. But…it was now eight years since the murder, and because Otto was only convicted of manslaughter, and the statute of limitations for manslaughter was seven years…Otto went free. Dolly’s trial (for conspiracy) ended in a hung trial, as Dolly proved to be a very sympathetic suspect. The police, lacking conclusive evidence, declined to try Dolly again.

Dolly found a new lover and stayed with him for the next thirty years. Otto left Los Angeles and disappeared. Roger Wilkes' The Mammoth Book of Unsolved Crimes claims that Otto became a successful writer for the pulps around 1915 or 1916, mostly of adventure stories set in "the South Seas or the Orient." No trace of any of Otto's stories has been found in the pulps, under his name or under the pseudonyms (Otto Weir, Walter Klein) Wilkes provides. But then, as I wrote here a while back, there are thousands, perhaps tens of thousands, of pulp issues whose contents will never be known, so it's quite possible Otto was a successful pulp writer.

Otto did achieve a sort of immortality, though: he was the model for Neil Patrick Harris' character in The Man In The Attic (1995).

As far as I'm concerned, this story has it all. It's sexy, it's sad, and it's creepy. What more can we ask for from life or from fiction?
Posted by Jess Nevins at 11:46 AM