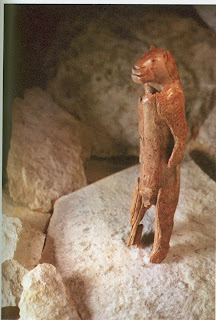 You probably don't recognize this. No particular reason you should. But you should tip your hat or salute it anyhow.

This is the Lion Man. (Scan taken from Brian Fagan's very well done Cro-Magnon, which I'll be excerpting here in the near future, 'cause, well, the book has some stuff worth excepting).

The Löwenmensch was taken from the Hohlenstein-Stadel cave in the Lone Valley in southern Germany. In 1939 two archaeologists, Otto Völzing and Robert Wetzel, found a Cro-Magnon settlement in the cave, including a huge amount of mammoth ivory fragments. In the late 1960s another archaeologist, Joachim Hahn, started piecing together the larger fragments. The reconstruction was completed in 1988 by Elisabeth Schmid and Ute Wolf.

The finished product is 28.1 centimeters (just over 11 inches) tall. Its pawlike feet don't allow it to stand on its own, so it was clearly meant to be placed in a hole or leaned against something. It is both animal and human.

The Lion Man is 34,000 years old, and is the oldest imaginary being in the world.

I should probably do some riff on the "Most Interesting Man In The World" ad campaign, about how the Lion Man still thinks of dragons as nouveau arrivistes and of the Epic of Gilgamesh as a one-hit wonder, but...the Lion Man is over three times older than the entirety of recorded human civilization. The Lion Man is seventeen times older than the amount of time from the death of Christ to now. I can't summon levity about the Lion Man. Just respect tinged with awe.
Posted by Jess Nevins at 9:52 AM

Wow. I wonder what stories went with Lion Man. You know there had to be stories.

Very interesting. I agree with Tara, I'd love to hear the mythology surrounding that figure.