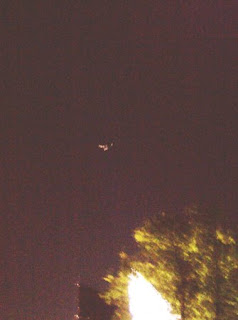 Over the past few weeks, as I biked through the intersection of 53rd and Clarkson in the hours after sunset, I noticed a couple of guys standing out in a parking lot, staring at the sky. Night after night, they were out there, just standing. I thought they were birdwatchers, enjoying the nighthawks who fly in and out of the billboard floodlights.

But I didn't see anything in the direction they were staring. So I biked up Wednesday night and asked them what they were doing. This is Austin. It's still the sort of town where complete strangers sometimes talk to each other.

It wasn't birds. They were on the lookout for UFOs. The two gentlemen identified themselves by their Youtube usernames, HardmanChris and JKL9149. 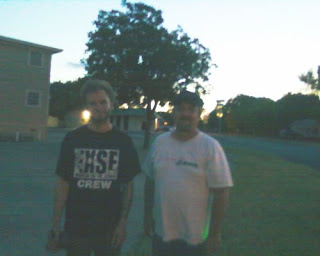 Apparently the area is lousy with aliens. I got the spiel for twenty minutes. Together they have over 200 videos of UFOs up on Youtube. Mainly the UFOs take the form of glowing balls of energy thirty feet across. There's a curve of light that comes off the top, but otherwise they are orbs. Because they derive their energy from a completely different source than our conventional engines, they zoom and dip around the sky with hardly any sound at all.

They taped this UFO as it flew above Airport Boulevard.


I showed them a picture I drew of a UFO that flew over my house exactly at midnight a year ago, and JKL9149 said he'd seen ones like that before. 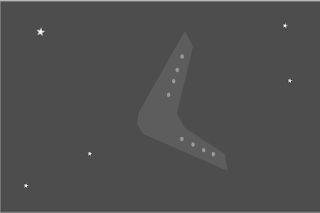 But the flying triangles he saw zipped around and hovered.

In their stories the UFOs do a lot of zipping. They zoom down, they hover. They come within a few hundred feet. They play hide and seek with military scout planes and airtraffic control at Bergstrom airport. The nearby Leif Johnson car dealership features prominently in the stories. The UFOs like to hover just above, their lights off, waiting to be startled.

One night they woke up and the UFOs had turned on all the appliances in the apartment and the skies seethed with lights. Although typically, the UFOs appear between 7pm and 9pm, and then there's a lull, and there's more between 6am and 8am.

They told me about a woman who was walking her pitbull nearby when she saw a little man crouching behind a bush. He stood a little over four feet tall. He was bald, without ears. His arms and fingers were abnormally long, and he wore a red jump suit.

I was told that I might not see UFOs that evening because of the partial cloud cover. Usually you need to see all the way up into space.

"Believe it or not, you can call them down by flicking your lighter," JKL9149 tells me. JKL9149 prefers to use an LED lightsaber. But in HardmanChris's videos you can hear him working that flint, luring the aliens like a man calling a cat by using the can opener.

They tried signalling the UFOs with a laser pointer once, but that scared them away for a whole week.

Theirs is a very personal universe. The aliens care if you're watching. They are coy and flirtatious in turns.

After I saw their videos and completely failed to see the lights change directions or swoop down over Airport Boulevard, certain bits and pieces of the story stood out: You need a clear night, and they are most common in the hour or two around sunrise and sunset.

So I have a working theory of what they've been videotaping with their nightvision camcorders. But I can't test it out until next Sunday at 8:45pm (with a brief, yet entertaining visitation at 8:16), and I'm not even sure I want to find out for certain. Which is better, being right about an obscure fact, or being wrong about something mysterious?
Posted by Matthew Bey at 6:10 PM