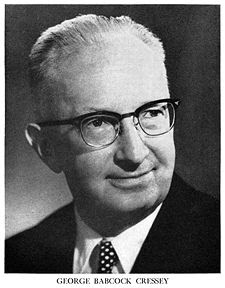 As is usually the way with Wikipedia, its entry on George B. Cressey (1896-1963) has the basics but not the good stuff. To paraphrase Mark Twain, when rebuked by his wife for swearing (she repeated every word back to him), Wikipedia has the notes but not the music.

I recently finished Julia Lovell's The Great Wall: China Against the World, 1000 B.C. - A.D. 2000 (2007), which entertained and (more importantly) told me a number of things I didn't know. I'll post some other excerpts from the book a little while down the road, but today's excerpt, about Cressey, will give you a taste, as well as hint at how easily anyone, even an owlish, scholarly geographer, could play the pulp role.

Writing about the Ordos, Lovell says,

The region was explored by an American geographer called George B. Cressey in the 1920s, a decade of profound internal disorder in China.His visits coincided with the heyday of the regional warlord, a period in which local power and loyalties changed course as easily as the desert sands he was charting. More than once Cressey found himself beaten back in his investigations by disorganized soldiers, at one point being forced into retreat by an approaching gang of 200 bandits (this despite his own thirty-six-strong cavalry escort). During more peaceful interludes, however, Cressey had the leisure to find the greater part of the area 'an arid desolate plain...an inhospitable waste' of climatic extremes (reaching 100 degrees Fahrenheit in summer, minus 40 in winter) covered in 'shifting sands held here and there by low scrub or wiry grass...where nature offers but little to man, and yields that little grudgingly.'
Cressey did the academic geographer thing WITH A CAVALRY ESCORT. Look at him! That guy did that.