Yesterday's Washington Post has an amazing article about the eyewitness reports of apparent insectoid surveillance drones seen at political protests. While the reporter has no luck in getting confirmation or denial of the protesters' suspicions, he does learn of an ongoing DARPA project to insert computer chips into moth pupae to create camera-toting remote-controllable cyborg moths -- the "Hybrid Insect Micro-Electro-Mechanical Systems" project (HIMEmS? rhymes with spimes?). Which the DARPA scientist conveniently explains by reference to Lord of the Rings. 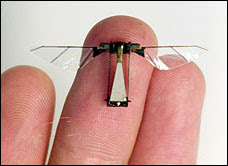 Vanessa Alarcon saw them while working at an antiwar rally in Lafayette Square last month.

"I heard someone say, 'Oh my god, look at those,' " the college senior from New York recalled. "I look up and I'm like, 'What the hell is that?' They looked kind of like dragonflies or little helicopters. But I mean, those are not insects."

Out in the crowd, Bernard Crane saw them, too.

"I'd never seen anything like it in my life," the Washington lawyer said. "They were large for dragonflies. I thought, 'Is that mechanical, or is that alive?' "

That is just one of the questions hovering over a handful of similar sightings at political events in Washington and New York. Some suspect the insectlike drones are high-tech surveillance tools, perhaps deployed by the Department of Homeland Security.

Others think they are, well, dragonflies -- an ancient order of insects that even biologists concede look about as robotic as a living creature can look.

No agency admits to having deployed insect-size spy drones. But a number of U.S. government and private entities acknowledge they are trying. Some federally funded teams are even growing live insects with computer chips in them, with the goal of mounting spyware on their bodies and controlling their flight muscles remotely.

The robobugs could follow suspects, guide missiles to targets or navigate the crannies of collapsed buildings to find survivors.

The technical challenges of creating robotic insects are daunting, and most experts doubt that fully working models exist yet.

"If you find something, let me know," said Gary Anderson of the Defense Department's Rapid Reaction Technology Office.

But the CIA secretly developed a simple dragonfly snooper as long ago as the 1970s. And given recent advances, even skeptics say there is always a chance that some agency has quietly managed to make something operational.

"America can be pretty sneaky," said Tom Ehrhard, a retired Air Force colonel and expert in unmanned aerial vehicles who is now at the Center for Strategic and Budgetary Assessments, a nonprofit Washington-based research institute.

The Defense Department is trying, though.

In one approach, researchers funded by the Defense Advanced Research Projects Agency (DARPA) are inserting computer chips into moth pupae -- the intermediate stage between a caterpillar and a flying adult -- and hatching them into healthy "cyborg moths."

The Hybrid Insect Micro-Electro-Mechanical Systems project aims to create literal shutterbugs -- camera-toting insects whose nerves have grown into their internal silicon chip so that wranglers can control their activities. DARPA researchers are also raising cyborg beetles with power for various instruments to be generated by their muscles.

"You might recall that Gandalf the friendly wizard in the recent classic 'Lord of the Rings' used a moth to call in air support," DARPA program manager Amit Lal said at a symposium in August. Today, he said, "this science fiction vision is within the realm of reality."

A DARPA spokeswoman denied a reporter's request to interview Lal or others on the project.

Now, what will be really cool, is when teenage hacker dudes start growing their own cyborg insects in the basement and unleash them on the establishment...

Update: More on DARPA's cyborg bugs here, courtesy of the BBC.
Posted by Christopher Brown at 11:14 AM

Where's Danny Dunn when you need him?

He's actually a paunchy middle-aged DARPA researcher, now. Up for retirement in a couple of years.