Of course, they don't mention her science fiction 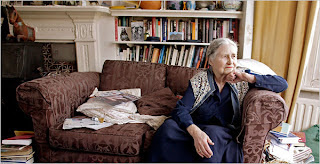 Doris Lessing, the Persian-born, Rhodesian-raised and London-residing novelist whose deeply autobiographical writing has swept across continents and reflects her deep feminist engagement with the major social and political issues, won the 2007 Nobel Prize for Literature today.

Announcing the award in Stockholm, the Swedish Academy described her as “that epicist of the female experience, who with skepticism, fire and visionary power has subjected a divided civilization to scrutiny.” The award comes with a 10 million Swedish crown honorarium, about $1.6 million.

A good reason to check out the Canopus in Argos books if you haven't already.
Posted by Christopher Brown at 8:37 AM

"Although Ms. Lessing at the beginning of her writing career had a few admirable qualities, I find her work for the past 15 years quite unreadable ... fourth-rate science fiction," Bloom told The Associated Press.

Finger on the pulse as always, Mr. Nakashima-Brown. I'd never heard of Canopus in Argos. Will have to give a look-see.

Thanks, Peggy and Jayme. It's been very interesting to follow the discussions of her work in the Establishment press, and how they deal with the SF. I had the McNeil Lehrer News Hour on Thursday evening while preparing dinner, and the interviewer (speaking to some N. Va. English lit prof) actually chuckled like a moronic high school jock while he asked "didn't she write *science fiction* too?"